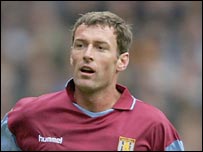 Aston Villaâ€™s Chris Sutton been mulling things over – for eight years – and has decided that he shouldnâ€™t have turned down that call up to the England B squad in 1998 after all. Despite Suttonâ€™s impressive Premiership form in helping Blackburn win the league, Hoddle ditched him altogether.

A glum Sutton has been left wondering if that act of arrogance has continue to work against him,

“I don’t know if it was held against me when Sven Goran Eriksson was manager.”
“I went to Celtic and had five good years there, playing some good football and never got a look-in.”

“Let’s be realistic, I wouldn’t have played that often because there were players ahead of me in the pecking order.

“But that decision back then? Yes, it was a bit impetuous.”

He’s got half a case because Alan Thompson put in fantastic performances for Celtic during the same period and earned himself one whole cap. Of course, Matt Le Tissier accepted an England B call up from Hoddle, scored a hat trick (and hit the bar twice) against Russia B and never heard from England again either.

Like fellow ex-Celticese striker Henrik Larsson at Manchester United, Sutton is getting another chance to prove he was always good enough for the Premiership. And if he scores bags of goals then Stevie Mac may call him up when he finally loses it in the next four months or so.

But he probably won’t. So, whatever…