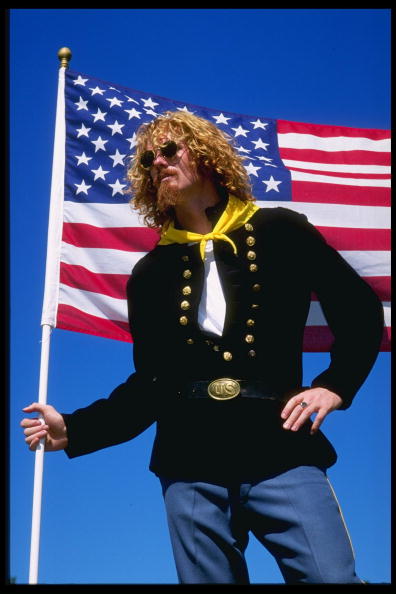 Edward isn’t sure what Alexi Lalas is taking, but he’d like to have some.

Alexi Lalas obviously has a huge chip on his shoulder, perhaps replacing the iridescent orange facial hair he used to have. A few weeks ago Alexi caused a stir, by implying that he might not release Becks for international matches (heâ€™s unaware that they donâ€™t have a choice) and that his move from Real Madrid to LA Galaxy would not be a step down. Today he riled me up even more by suggesting that the Premier League isnâ€™t that far ahead of the MLS in terms of quality:

â€œWe know when we’re being patronized and I get so irritated when I hear the experts in England talk about David Beckham as if he’s going into semi-retirement by leaving Real Madrid for Los Angeles. That’s ignorance of the first degree because almost every one of those critics has not even seen a single MLS game. It’s insulting to us and to our sport to say Beckham is on his way to Hollywood when he’s coming to play in one of the most competitive leagues in the world. There are a lot of stars in European football who would struggle over here. But Beckham has done his homework on this league, and his team-mates, and he recognizes the merit of American soccer.”

“You know, there’s no accounting for bad taste. The fact that a segment of the world worships an inferior product in the Premiership is their business. In England our league is considered second-class but I honestly believe if you took a helicopter and grabbed a bunch of MLS players and took them to the perceived best league in the world they wouldn’t miss a beat and the fans wouldn’t notice any drop in quality.”

I first became aware of the goatee sporting ginger at USA â€™94 â€“ my dad tried to ignore his annoying hippie-esque presence on our TV, but became increasingly disgusted when he signed for Padova and played for them for two years, ruining our Sunday afternoon Italian football marathons. He clearly has delusions of grandeur which may be rooted in the fact that he scored for the United States in their 2 â€“ 0 win over England in â€™93. At any rate my dad only had two words about him â€œGinger Pratâ€ â€“ and those words still ring true. Last summer I was treated to Alexi Lalasâ€™ â€˜analysisâ€™ of world cup matches on American TV, the man always fought his corner like a ginger rocky, claiming the US could easily make it to the quarters. Aside from his soporific and utterly misinformed analysis I noticed that the ginger goon had shaved off his goatee beard (great move Alexi) although I suspect he was going to cause a frissant of excitement by shaving it off â€“ he probably thought that the response would be similar to when Dylan went electric.

I think his goatee amputation has had a strange effect on him; whereas the goatee calmed him down (perhaps by stroking it when deep in thought), the new goatee less Alexi seems to be an angry man. It would be better if heâ€™d have left his ginger goatee perched on his chin; it serves as a warning, a sign that the person wearing it is clearly disturbed â€“ now he is merely and undercover weirdo, a deluded loon masquerading as a professor of football.

After growing up in England I have been living in Michigan for a while now; by far the biggest gap in my life is football, or the lack of it. I will have to watch next season on cable which shouldnâ€™t be too bad, aside from the horrendous commentary. There is no football on US TV worth watching, is it any wonder that all the yanks round these parts think this sport is shite?

MLS doesnâ€™t count, I would honestly rather watch a snuff movie starring my parents than be subjected to the mephitic league that is the MLS.

Aside from a few pockets, the US is footballing tundra. And Michigan is one of the places where â€œsoccerâ€ is most vilified. Michigan is an excellent state to examine, despite hosting a Romario goal in the Brazil-Sweden 1-1 draw at the Pontiac Silverdome; no one has any knowledge or passion for football. Although the sport is hugely popular with children, football in America remains an utter enigma. To this day, the total attendance for the USA â€™94 final tournament of nearly 3.6 million remains the greatest in World Cup history, despite the expansion of the competition to 32 teams in 1998. The fact that last years World Cup final got more American television viewers than the baseball World Series is also perplexing.

And yetâ€¦there are small slivers of what Lalas said that ring true, the Premiership is becoming a two horse race. Lalas aspires to make the LA Galaxy on a par with Man United â€“ could it be that instead of American soccer teams looking to Europe as their future, that the MLS format resembles the UKâ€™s future? Or worse still, with the influx of American Tycoons will we start to turn into the NFL.

American Football, the ugly stepsister of the beautiful game is 60 minutes of play constantly interrupted by “time-outsâ€, ends of quarters and flagging down of plays by referees. Adding to the soporific atmosphere is the fact that whole legion of players is mercy to one man – the Coach, who makes all tactical decisions. My in-laws seemed perplexed when I told them that in English football the players make the majority of the tactical decisions, it seems like American sportsmen need to have their hand held and have all decisions made for them, thus putting out the last embers of spontaneous play. “Football” is an utter misnomer for this sport, when the ball is touched by a foot it is during a completely superfluous act. Any kicking for extra points is a fait d’accomplis, a needless evolutionary blind alley, like male nipples. This sport, with the university brass band at half time is a symposium of geeks but it is smoothly done as is most entertainment in the states. American football and entertainment in general over here is peppered with commercial breaks, shouts of “time out!â€, “action!â€, “touchdown!”, and “cut”, and audiences that applaud and cheer only when prompted by a flashing light. I’d take a windy cold Goodison over this anytime.

This tedious battle of attrition is punctuated by sporadic yelps of pugnacious glee from the crowd, erupting momentarily from their catatonic silence whenever a tackle or random act of brutality occurs. Of course, it is very sanitized brutality, stopped instantly by referees busily scurrying over, and dulled by the extensive armadillo coating of body armour. The players dance around in pre-prepared celebration signature moves whenever their team progresses a few yards , or they stop the opposition moving a few inches forward, this sport is closer to tractor-pulling than football. A touchdown is greeted by screams of people just going through the motions and is very different to witnessing a goal at Goodison.

So in summary, Lalas is an eccentric goon who doesnâ€™t know the second thing about football (he signed Abel Xavier for Godâ€™s sake!). I will never be able to watch a full MLS game as it is SO sleep-inducing, and it will be the tragedy of tragedies if the Premiership turns into the NFL.