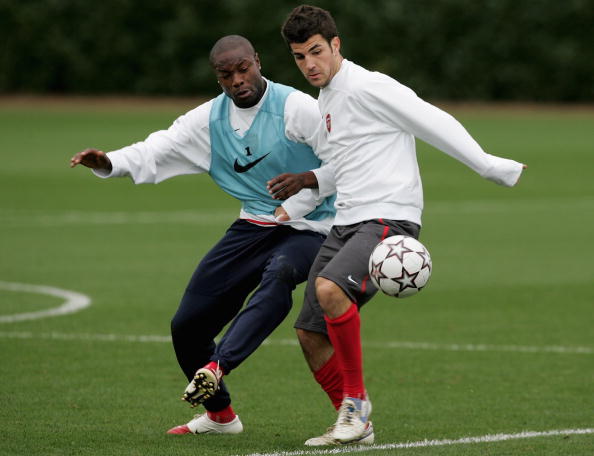 With Henry leaving, the club chairman looking generally a bit lost, and no particularly re-assuring news from Arsene Wenger, COS new boy Jason looks at what Arsenal can do to improve without spending a pound.

Now that everyone is probably bored with the transfer talk, and the much talked about departure of an Arsenal legend (no names!), I thought I’d start question the grey cells on something different. What would you like to see tried out in pre season training, or the various friendly tournaments Arsenal are due to play in? Things that you think would improve us, or just things you’d like to see done, whether it’s formations, player positions or set pieces.

– The 4-3-3 formation, would like to see it tried out as we all know we have the players for that kind of setup. Would like to see Adebayor or Bendtner up front as the lone striker with two deep lying wing forwards playing off him.

– Kolo Toure in midfield. The guy has everything you could want a midfield enforcer to have- controlled aggression, loping runs and crunching tackles. Is one of the most eager players to get us into games when we are behind and undoubtedly his energy is better suited to midfield, especially as his lack of heading ability is often exposed in defence.

– Eboue in midfield. We’ve all seen how good he is going forward, although some feel he is suspect defensively. Could he handle the lesser space afforded to him in midfield? If this was pulled off, we may not even need a winger, although some would question Hoyte’s capability as a first choice right back for the entire season.

– Rosicky playing as a shadow striker, in the Dennis Bergkamp role just behind Adebayor. Although Rosicky’s performances on the wing have by no means been poor, he works better controlling the play from Cesc’s position or being a free role as Ronaldinho is for Barcelona. He could accomplish much playing off Adebayor up front, perhaps this could be used if Van Persie gets injured at any point this season.

– Worked set pieces, ones that have been practiced by the club and then can be put into place in matches. An example of this is the one England used in the U21 Championships, where Lita scored with a diving header from two yards out. If executed properly, these can cause havoc

– Lastly, the Van Persie-Bendtner partnership. In a few games as we’ve seen Bendtner shine in the Championship and Van Persie shine in the Premiership, and the duo compliment each other perfectly. Unlike Adebayor, whose finishing at times is erratic Bendtner can put the ball past the keeper like the best of them and the Premiership saw how devastating Van Persie was last season. Put them together and do you have an unstoppable force? Hopefully!?

With no new big signings anywhere on the horizon, what would you do to improve Arsenal with the squad we have right now?