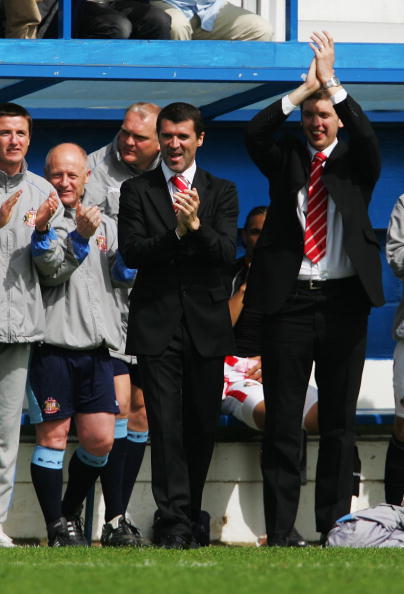 After a win against Tottenham boosted his popularity amongst the neutral fan, Roy Keane has made a brilliant statement about the weakness of certain footballers who sometimes let the WAG’s decide their future.

“If they don’t want to come to Sunderland because their wife wants to go shopping in London, then it is a sad state of affairs.

“Unfortunately that is what is influencing a lot of footballers’ decisions. Priorities have changed for footballers and they are being dictated to by their wives and girlfriends.

“I could name three or four big players now and clearly their wives and girlfriends are running their lives because they are doing these photoshoots and all that kind of stuff.”

Whether he’s a little miffed about the lack of big stars joining his side, or just having a dig at a couple of players (David Beckham and Ashley Cole come to mind), I think Roy Keane has got it just about right.

In the grand scheme of things, the importance of whether or not the WAG’s get a certain shockingly expensive pair of shoes from a certain fashionable boutique in a certain fashionable city is pretty low down on the list. Probably just above whether I fart in private or not. I think many people are particularly disgusted by WAG’s and their behaviour because of the petty way in which they conduct themselves – money-oriented, dim-witted, shameful role-models who couldn’t point to Sunderland on a map.

Roy Keane, a man who no-one bosses about, has said what we all think. Of course, there are many issues governing where a footballer chooses to play his football, and yes, his missus is one of them. But if the WAG dictates the footballers destination solely based on what she thinks of the move, well it certaily is a sad state of affairs. The people that Keane’s words were aimed know who they are, and they should be ashamed and embarrassed.

What I’d like to see is some big-time footballer give his lady the boot because of the pathetic routines in which they run their lives. The term ‘WAG’ was coined at last years World Cup, when the other halves of England players put on a bigger show than the team. Wearing fashionable clothes and purposely flauting their stupidity with other WAG’s in Germany, running up joke-like drinks bills and generally being an inadequate human being is painful for me to witness.

The Beautiful Game has a lot of problems, but one thing we could really give the boot is these numpty mistresses with nothing better to do than look at pictures of themselves in newspapers and magazines from the night before.