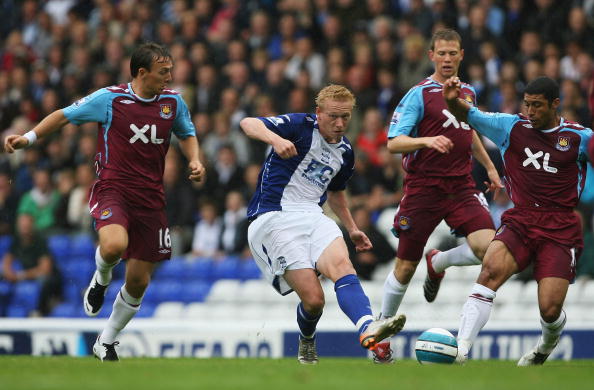 Effra is glad West Ham picked up some points, but maybe more glad that tabloid vultures are circling Tottenham now.

Three well-earned points has averted what would have been a media-generated, full-scale crisis for West Ham. The smell of last season just wonâ€™t go away. The deluded Kevin McCabe seems determined to repeat his untruths until he has handed over all his clubâ€™s assets to wide-eyed lawyers whilst those journalists not busy taking notes on a few more conversations with Kia have been busy with the supposed latest bust-up in the West Ham dressing room about Curbishleyâ€™s management. Iâ€™d like to think that this was just pure media invention, but since Robert Green has recently admitted that there appeared to be a mole in the West Ham dressing room last year, and Curbishley still has a few unhappy Bentley boys on his hand, as well as the wrath of those whom he did manage to sell, then perhaps there is still someone wreaking mischief from within. If so we have got less than two weeks to be rid of them.

But even if we could be sure that our players are all committed to the cause, the media are hungry for trouble and apparently determined to cause Curbishley problems. Even with three points from two games, weâ€™re still reading that Curbishley doesnâ€™t know what he is doing in the transfer market, or that he has six weeks to save his job. Sure on his own admission he has made some mistakes, and given the gulf in expectations and media attention between being manager of Charlton and West Ham, Curbishley does have something to prove and his public utterances shows he knows it.

But even if you canâ€™t see through Sheffieldâ€™s pathetic self-pity, the Tevez affair can hardly be blamed on Curbishley. Itâ€™s also not his fault if West Ham have got a bit more money to spend than usual, or that he inherited a group of misbehaving prima donnas from Pardew or that Pardew, who is still something of a media darling nonetheless, let a bit of success go to his head. Whatever sins of modern football the media think West Ham have come to symbolise, having Alan Curbishley as our manager canâ€™t possibly be one of them. So the journalists think heâ€™s not very charismatic but neither is Fergie if you take away his success. Curbishley is a rare thing: an experienced, English manager with no suggestion of crookedness managing the club that he grew up with, using far fewer foreign players than many of his rivals, and trying to take the chance that the new owners have given West Ham to be something more than a yo-yo club.

Those who proclaim to be unhappy about this that or the other about the state of the Premier League should really look elsewhere to satisfy their hypocritical sanctimony.