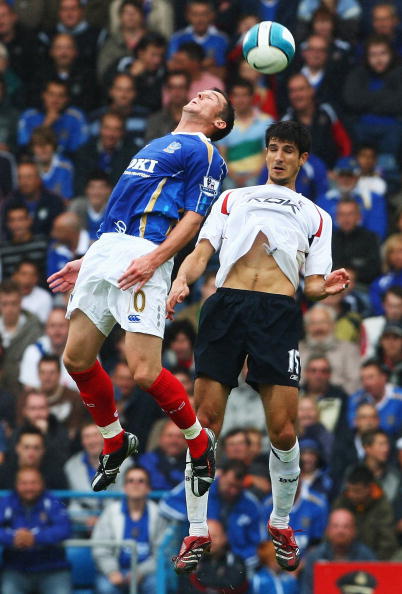 Portsmouth manager Harry Redknapp has performed a bloody huge transfer u-turn by admitting that he is ready to listen to offers for his Â£6million summer signing David Nugent, so that he can bring another striker to Portsmouth. Have I missed something here? Isnâ€™t Nugent a striker? Hmmmm.

With the ink on Nugentâ€™s Pompey contract barely dry, one has to ask the question; just how crap is David Nugent? Has he been falling over his feet in training? Has he got the first touch of a blacksmith? Is this man purporting to be a Premier League standard footballer actually just a Jack Sommersby-esque look-a-like? Only â€˜Arry knows the answers to these questions, but one thing is for sure; most Evertonianâ€™s are now dropping to their knees and offering a prayer of thanks to the Moyesiah, who snubbed Nugent even though he had been coquettishly flirting with the Goodison Club all summer long.

“You are always looking to improve your team and it just depends who was available. If someone came up who was a fantastic option and I had to sell somebody, it’s whoever you can sell. You need to raise money sometimes, you have to sell people that you’re not so keen to sell because you want to get somebody else in. It’s no secret Derby would like to buy him (Nugent). His old manager fancies him at Derby, we’ll have to wait and see.Derby have been in and they would like to sign him, they would like him very much. Billy knows him and if David wants to go… if people want to move then you let them go. t’s up to David really, I’ll have a chat with him and see what his plans are.”

It appears that like some sort of tawdry summer fling, â€˜Arry has finally come to his senses and realized that Nugent isnâ€™t good enough for him; the question remains though â€“ how much can they get for him if it seems like they’re trying to offload him before he’s even unpacked his suitcase.

Derby are having a sniff around â€œThe Nugeâ€, but given the former Preston manâ€™s obvious obsession with Everton maybe he simply won’t be happy until he is on the Toffeeâ€™s payroll.

But with Yakubu and Johnson already lined up, Nugent may be jumping from the frying pan into the fire. Always wanted to use that phrase!