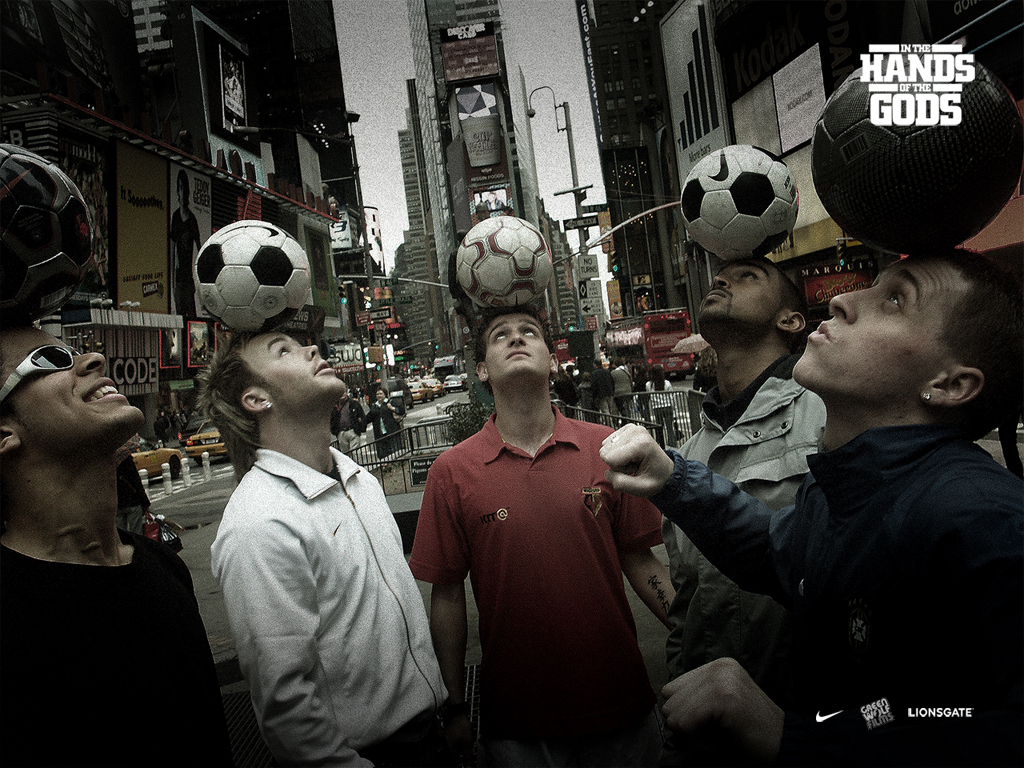 CaughtOffside was invited to a exclusive sneak preview of the upcoming football film In The Hands of the Gods, and Daniel was mighty impressed.

History suggests that football and films do not go hand in hand. â€˜Goalâ€™ was better than expected but little more, â€˜Bend It Like Beckhamâ€™ and â€˜Gregoryâ€™s Girlâ€™ were right on feminist tales rather than football stories, and Sean Beanâ€™s When Saturday Comes was, well I never actually saw it, but the thought of â€˜Ey up, Frodoâ€™ starring for Sheffield United has â€˜straight to videoâ€™ written all over it. True football fans know the only film of their beloved sport worth its salt is the epic â€˜Escape to Victoryâ€™. However, even this noble tale lacks something that your average fan can relate to (unless that is youâ€™ve been captured by the Hun, stuck in a POW camp, formed a footy team with Michael Caine, Sly Stallone and a curious mixture of world football stars and Division 1 journeymen and produced a smashing comeback that brought joy to the hearts of the oppressed French â€“ come on, you know who you are). But a new film is about to be released that kicks the realism back into football.

The Hands of the Gods is a documentary that follows the fortunes of five freestyle footballers (i.e. they do tricks more elaborate than a few kick ups) from England in their quest to meet their hero, Diego Maradona. (Yes, being English and idolising the drug-taking, stomach stapling, tax avoiding cheat is a little odd).

The five young men have personalities you will be familiar with but distinctive backgrounds, which makes the story engaging. Woody and Danny are friends from London who havenâ€™t been awarded the professional contracts they have worked their whole lives towards, but who donâ€™t want to give up on their dreams. Mikey is a gobby scouser who wanted to be like Maradona the moment he saw him steal a goal in the Hand of God incident (insert your own stereotyping joke about thieving scousers here). Jeremy is a softly spoken, deeply religious, home-schooled kid with outrageous talent. And, finally, Sami is brooding and angry with his descent into drugs and crime after arriving in Britain as a refugee from the Somalian civil war.

In filmspeak this is a coming of age road movie. The camera follows the five as they travel from New York to Buenos Aires, displaying their skills on the streets, in nightclubs and football stadiums in order to raise money for food, accommodation and most of all transport. It is not a smooth ride and when raising money is proving tough the group decides to break up and put the money theyâ€™ve raised towards two flight tickets. Choosing who should go and how it should be decided â€“ vote, draw, freestyle competition â€“ is controversial and you will have people you want to make it and people you donâ€™t.

Watching five British wide boys try to engage the very different populations of North, Central and South America is entertaining. Watching the reality TV style tantrums, hugs, whingeing and self-pitying to the camera is less so. Itâ€™s only Jeremy and Woody that we see performing an array of impressive tricks and you canâ€™t help but feel that some of the guys have been selected to bring diversity and conflict. Which is fine for Big Brother, but not for football. Sami balances the ball on his head once or twice, but generally seems to be about as natural a freestyler as Steve Bould.

Samiâ€™s hypocrisy and bad attitude, mean you donâ€™t care for him in the way the film-makers intended, although clearly he has the most to gain from the experience. The film wants to be a deeper tale about disillusioned young men trying to find meaning in their lives and prove to the world that rejected them that they can be achievers. It just about pulls it off thanks to Woody, the one person who genuinely and passionately idolises Maradona. Woodyâ€™s leadership of the trip and desperation to meet Maradona weighs increasingly heavily on him. Fortunately, Danny is on hand to be his Sam Gagee and lighten the burden of his quest, and Mikey, as the scrawny, bug-eyed Gollum, provides some comic relief.

The Hands of the Gods is cheaply made. There are no stars or superheroes (although Danny and Jeremy meet lesbian Shrek look-a-likes on Hollywoodâ€™s Walk of Fame in the filmâ€™s funniest scene). But the film does have characters who have a heartfelt love for football and scenes that show some bloody impressive ball tricks (and one or two where Sami balances it on his head for a couple of secondsâ€¦probably with the help of some Blue-Tack).

In The Hands Of The Gods is in theatres September 14th.