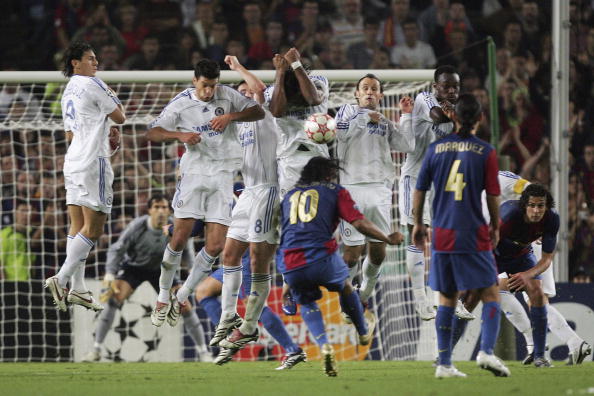 Chelsea captain John Terry has said that Ronaldinho would be an excellent signing for his team , but that he would have to subscribe to his teams work ethic. Chelsea fans , wuld you take Ronaldinho even if he didnâ€™ defend? The Chelsea captain said:

“It was exciting seeing the link with him and it would be a great acquisition to get a player of that ability inâ€¦ I’ve played against him, seen what he’s all about, and he’s such a difficult player to mark. He’d give us an option if he does come and it would be great for the Premiership to have a player like Ronaldinho here. He was close to going to Manchester United a few years ago but, for me personally and for everyone at Chelsea, it would be great to have him with us.”

Terry then gave a stark warning to Ronaldinhno and any other Flash Harrys that hungry hippo billionaire Abramovich is considering gobbling up:

“I’d like to think he could fit into the team, though he’d have to learn about the defensive duties expected of everyoneâ€¦We’ve got wide men going forward but they’ve got defensive responsibilities as well. We’ve seen at times that Jose Mourinho has taken Shaun Wright- Phillips or Joe Cole off because they’ve not been doing their bit at the back. It takes players a month or so to learn that you have to track back and, if you don’t, then you come off. Once you’ve realised that it’s about a team and defending as well, you can attack as well and he can give us something that not many in the world can give us. I suppose if he’s doing what he’s so good at going forward, then perhaps the manager will let him off a little bit at the back, but we’d have to see.”

Would Ronaldinho cope with the patronizing month of crack-training, drilling the worlds best player on the art of defending?

The real question remains though would Chelsea back Mourinho’s stance if he didnâ€™t sign Ronaldinho because he wouldnâ€™t cover Cashley Cole on one of his meandering forays forward, no doubt daydreaming about frittering away his latest pay packet?