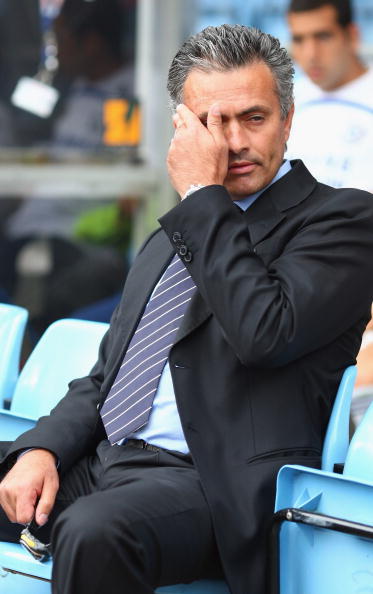 In news that will no doubt have the whole nation frothing at the mouth with excitement, a cunning reporter sneakily managed to get a long-lens shot of Jose Mourinho’s notebook during Chelsea’s Villa Park humble pie eating session.

With Mourinho’s post match comments as neutralizing as a batch of Tums, we all wanted to know what Jose’s secret diary scrawlings would reveal. Surely the real fire and madness would be let loose in his Adrian Mole-esque secret diary?

Well, apparently not. Certainly there were some random words tossed around but where was the Sir Alex cartoon? The psychotic jumping from idea to idea like a bluebottle fly? The careful flip-book sketches featuring Rafa Benitez and Arsene Wenger engaging in lewd acts?

The words â€œFast throw-inâ€ and â€œpass ballâ€ were sighted on the page (and tragically for Chelsea not on the pitch) , also seen are the words â€œThey pass behindâ€ , as well as “clench” – which we can only hope refers to something vaguely football-related.

The Times was good enough to interview 2 handwriting experts, one made us fall asleep so here is the opinion of the second, slightly less boring one; Elaine Quigley, of the British Institute of Graphologists:

This quick and intuitive writing comes from a man who can think on his feet. He likes innovative solutions and can often see things from an unusual perspective. This is seen in the fluency of the writing movement and the lack of definition in his writing strokes, implying that nothing is cut and dried until the last moment. This fluency gives him the ability to come across as sharp, quick and often uncannily correct. But even though he can make insightful judgment, he can also be determined and dogmatic at times.The long lower zone of the script shows his restlessness and it is likely that he has trouble standing still but will pace around in times of stress.â€

Given that Jose Mourinho is probably one of the most stoic, calm figures who generally just sits on the sideline doing a whole lot of nothing then this whole episode has only confirmed what we already knew – handwriting experts are bollocks.