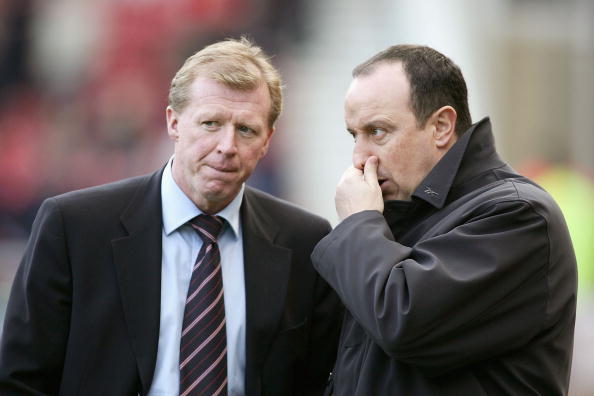 England manager Steve McClaren is going to start playing what the Guardian calls “hardball” with Liverpool’s keystone midfielder Steven Gerrard.
McClaren has drawn a line in the sand, as is intent on standing up to Liverpool’s bearded Spanish gibbon, McClaren said :

“I have to do whatever I can to get the best players out there….That is what I shall do.”

This is in direct defiance of Rafa’s edict last friday. Rafa said that :

“We do not want Steven to play for England with any painkilling injections…We did that in the game against Chelsea and it took four days for him to recover enough to be able to return to training.”

Rafa is supported by sports specialist Dr Mike Bundy who told the Guardian that Gerrard will be taking a long term risk if he uses an anaesthetic to play : ”

“It’s a short-term gain for a long-term risk….The worst-case scenario is that a footballer has a local anaesthetic and makes the injury much worse by playing on it. The best is that he plays and nothing happens. But that’s the risk you take.”

So on one side we have Stevie G, Stevie Mc-C, and England Supporters (all two of them) — on the other side we have Rafa and Dr Mike Bundy.

Whose side are you on?