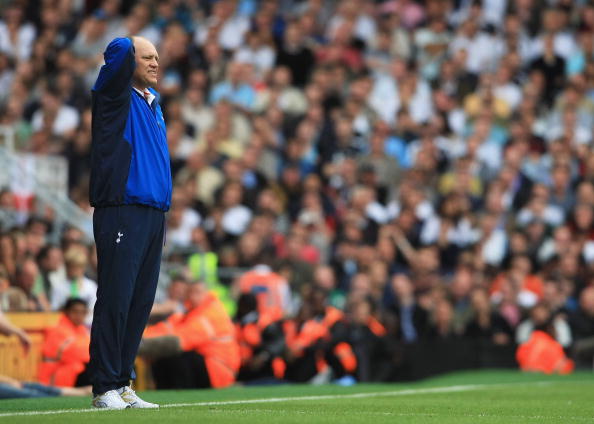 It may have been a few days ago, but ETP from TottenhamMassive.com has just come in off the ledge.

Martin Jol is often accused of failing to act decisively in using substitutions but today against Fulham it was his rashness in changing an apparent winning formula which cost Tottenham dearly. The media darling who cuts a â€œtough guyâ€ mafioso figure today betrayed that image with some worrying wimpishness that would make Napoleon Dynamite look like John Rambo.

Tottenham bossed the midfield for most of the match today, but it was Jolâ€™s senseless decision to withdraw Malbranque and Keane which turned the tide. It is easy to look back and second guess, with the benefit of hindsight, but this has happened more than once during the jovial Dutchmanâ€™s reign – Jolâ€™s conservatism snatching defeat (a draw felt like one) from the jaws of victory when going for the jugular might have produced an even more emphatic result.

For all Jolâ€™s harping in the press regarding Jermain Defoe – and I paraphrase – that he runs a tight Tottenham ship that is more â€œbusiness than playgroundâ€, it was his inexplicably benevolent decision to give Defoe playing time that must be examined. It broke up the electric Keane/Berbatov partnership which tore holes in the paper-thin Fulham rearguard and tested the home defence relentlessly. With Defoe harrying and pressing but once again failing to make diagonal runs to intercept through passes, movement was minimal in the denouement to the match. Worse still was to bring on the recently-recuperated Michael Dawson, a terrific defender at his best but one who has suffered misfortune aplenty in his last few matches at Craven Cottage.

Rather than fight fire with fire by countering Fulhamâ€™s attacking substitutions with positive replacements of his own, Jol effectively invited pressure onto the Tottenham backline who stayed rooted to the box and made a mockery of Dawsonâ€™s garbled instructions that Spurs were going to three-at-the-back. It was a jumble, a muddle, a complete balls-up. To steal a Paul Jewell quote from last season, Tottenham then inevitably conceded the â€œFred Karno Goalsâ€ that such comedic, unthinking attempts to bolster defensive solidarity bring. Whilst Smertinâ€™s shot must be put down to misfortune in taking a wicked deflection, and the third goal was snaffled brilliantly by the candid Kamara, Spurs only have themselves to blame – yet again.

Gareth Bale, in particular, was caught between two stools after the switch, his pace which would have caught Fulham on the break effectively being blunted by Jolâ€™s negativity. He impressed as Spurs took Fulham apart in the early stages, and his well-taken goal belied his young years. However, he was powerless to prevent Tottenhamâ€™s usual capitulation under pressure and must be wondering when his first victory in a Tottenham shirt will come.

Five games into the season and it looks like it will be a long, harsh season for Tottenham Hotspur. With Liverpool romping to victory over Derby, even the scale of Tottenhamâ€™s slaying of The Rams diminishes. Jol, whose tightrope shrinks by the day, must surely now hope for a cup run to bring salvation. However, at the moment those gleaming handles of the FA Cup and the towering sides of the UEFA Cup trophy must seem very far away.