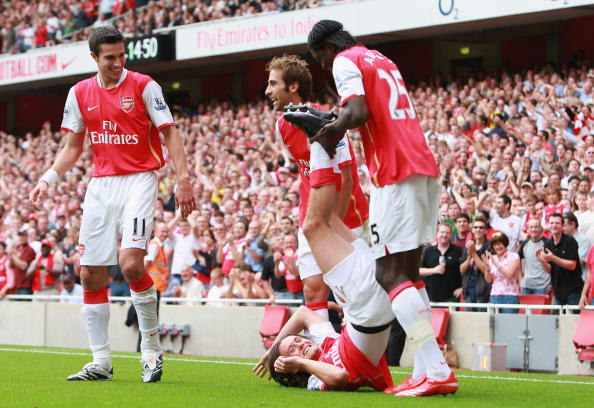 Jason reckons there’s no better place for Arsenal to be than underdogs.

While the Gunners are currently second in the table, level on points with leaders Liverpool albeit with an inferior goal difference, nearly no one apart from their fans have even mentioned their names with regards to who will be competing for the title come May 2008. Liverpool will finally do it is the cry, or that Manchester United and Chelsea will both recover from their shaky starts to reclaim their places at the top. The young Arsenal side is written off as being too youthful, too experienced- how can they do it when the average age of their first team is so low?

Although many Arsenal fans may be irritated with this, the reality is they should be happy- the Arsenal team always thrives as the underdog. This was best shown in the run to the Champions League final during the 2005/06 season- the Gunners outclassed and outplayed all opponents that neutrals and football pundits alike thought would destroy them; first relying on a magnificent Thierry Henry goal and some brilliant defending to beat Spanish giants Real Madrid, then running rings around an ageing Juventus side. In fact, in the first knockout round that Arsenal were expected to comfortably dispatch their opponents they had problems- while they won the first leg by a single goal against Villareal, the second leg was a tense, nervous affair that could have gone either way. However, luck stayed with the Gunners as Riquelme missed his penalty, and although they were thwarted in the final by a star studded Barcelona side, they were arguably the better team for large spells of the game- despite having a man less for all but the first eighteen minutes.

So, why exactly should the Arsenal side be happy to stay out of the limelight? Well, being in the limelight means all eyes are on you, and although that is great when you are winning games, it provides unwanted pressure when you are not doing as well. Expectations will rise, as they are for Liverpool- a team that has not won the title for the last seventeen years is expected to lead the title race, just because of their large win over a side bound for relegation. All I ask for is this, fellow Gooners; don’t have any expectations of the title at this moment in time, just hope for an improvement on last season. With ten points in four games (we had half the amount at this stage last season) we have certainly started off better, and for that all those that sport red and white around the world can rejoice.

This article appeared previously on InsideArsenal.co.ukÂ