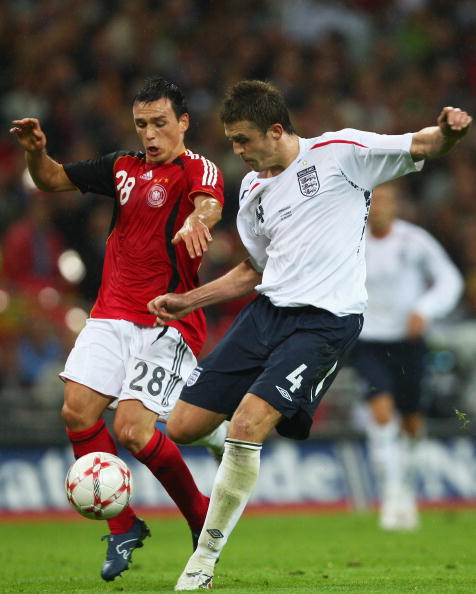 Daniel ponders the role of Michael Carrick for club and country.

During the BBCâ€™s preview of the England v Israel game the only dissenting opinion amid a swirl of upbeat confidence was that Manchester United’s Michael Carrick should have been playing. With Chelsea midfielder Lampard and Hargreaves both out injured, McClaren could have been expected to pick Carrick based on previous selections. It seems that Carrick is now the fifth choice player for the England central midfield and if both Hargreaves and Scholes are available for Man U, he may become just a squad player at Man U too. A harsh fate? No, it is an overdue downward reassessment of a talented player who has a fundamental weakness as a central midfielder.

Carrick has excellent passing ability: he can accurately pass short or long with both feet, a rare skill among English footballers. He also picks up a fair degree of possession from opponents in front of his defence.

These abilities are often overestimated though. Carrick is capable of playing accurate long passes and defence splitting through balls, but in practice too much of his passing is sideways and backwards. This being the case, too much attention should not be given to his pass completion percentage. Knowing when to play the simple pass and when to be more ambitious is a key decision that central midfielders must make. Some, like Gerrard, go for the big pass too often; Carrick errs the other way. Also, in his â€˜quarterbackâ€™ role in front of the defence, Carrick does not make himself available enough to receive the ball from team-mates. To play the role effectively you need to be getting into space and demanding the ball and dictating play like Pirlo does for AC Milan and Italy. But Carrick is too static and when centre backs are looking to pass the ball onto the midfield, he can often be seen stuck in a direct line behind an opponent. Consequently, in Man U games you see Scholes drop deep to get possession off the centre backs more often than should be necessary and Gerrard and Lampard do the same in England matches, which leaves a big space between central midfield and the forward line. Add this to the facts that Carrick does not get into advanced positions, score or run with the ball that much, and his offensive threat is clearly limited.

His defensive ability is also exaggerated. Statistically, he gets a lot of interceptions, but as Man Uâ€™s opponents are frequently playing a deep, defensive game with only one or two players in advanced positions, it is inevitable that the player in front of Vidic and Ferdinand will pick up a lot of possession from balls that are not so much passes as clearances. Carrick is not a ball winning holding player like Makelele, constantly putting in successful tackles.

The limitations mentioned above are not due to a lack of physical skills; it is Carrickâ€™s temperament that appears to be holding him back. Carrick is too passive: he is not striving to get the ball from team-mates and impose his passing game, he is not pressuring opponents enough, not shooting enough, not running with the ball enough. In summary, Carrick is not doing enough. To not be involved in the game as a central midfielder is a cardinal sin, but Carrick regularly goes missing, particularly when his team arenâ€™t on top.

Lack of involvement and aggression is not something Carrickâ€™s main rival for club and country, Owen Hargreaves, could ever be accused of. Hargreaves is constantly on the move: trying to win the ball, find some space, and inject tempo into a move with some quick and direct running. When his team are down and the opposition are on top, he tries even harder. His determined performance in adversity against Portugal in the World Cup was hailed as one of the best ever by an England player in an international tournament. Hargreavesâ€™s energetic performances this season in a stuttering Man U side have impressed. Last season, when Man U played exceptionally well, Carrick was the only player I heard criticised by fans of the team for not contributing enough.

Hargreaves should be picked ahead of Carrick for club and country because he has the right personality for central midfield. Carrick does not and personality is a very hard thing to change.