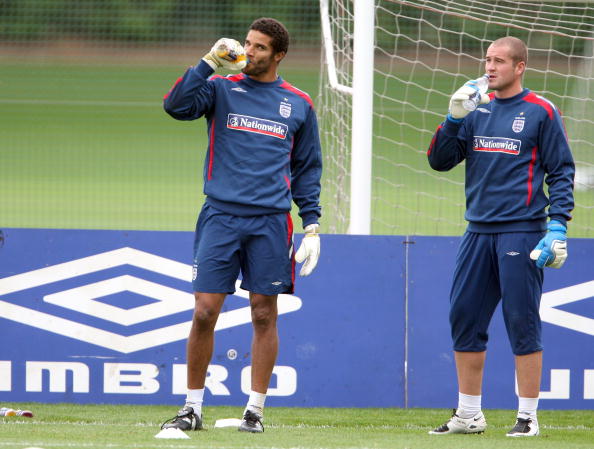 John Stevanja provides thoughts and analysis on the fat bloke’s favourite position – goalie. John runs Keeper Skool, the blog for the competitive goalkeeper. Order your copy of his free e-book The G-Code here.

I think it was zany singer Bjork who was quoted as saying “Football is a fertility festival. Eleven sperm trying to get into the egg. I feel sorry for the goalkeeper.”

Lately, I’ve been feeling the same way as Bjork, not about the fertility festival rubbish…but for these goalkeepers in the EPL (who listens to Bjork anyway, right?)

It looks like McClaren has recently given his vote of confidence to Paul Robinson rather than David James for England’s upcoming game against Israel. If the wider world of soccer was UK Idol, then McClaren would get an overwhelming vote off the stage from the public, and a pompous scowl from Simon Cowell. If football were played out in ancient Rome, he’d probably get thrown out into the arena to get chomped up by some under fed lions. But with overwhelming public scrutiny, he still stands firm in his choice of goalkeeper, which is kind of admirable, or could just be blatant stupidity.

Let’s put it this way, Robinson is not as bad a goalkeeper as every arm chair critic thinks…every goalkeeper has their moments. But, in Robinson’s case his blunders eventuate in situations of such importance, intensity and national focus, that the backlash from fans and critics bite harder than a rabid pit-bull in a dog fight. Goalkeeping hurts that bad sometimes. Robinson’s game against Germany showed indecision, bad timing and a lack of faith in his own goalkeeping ability, and funnily enough the guy has ability in spades.

No matter how many blunders Robinson has mustered, there still seems to be faith from the English coaching staff, but how much faith does Robinson have in his own ability? There are a few key things that stand out in Robinson’s and other EPL goalkeepers performances in the past few weeks. It shows some telling signs of succumbing to pressure in an overwhelming environment, and the squeeze of endless campaigns by relentless club owners hungry for glory and silver to build up their already lavish coffers. Craig Gordon recently said that players do everything for their club owners and fans, so where is the love?

Lehmann is a case in point of an aging goalkeeper whose body is feeling the toil and labour of endless seasons that span out like a Siberian winter. Lehmann, for all his craziness (and sometimes stupidity) is a brilliant goalkeeper, but psychologically he seems to be dried out, hitting the wall. Physiologically, his body is tearing itself apart (literally) and no amount of professional help will soothe those ailing bones, he just needs rest. Alas, the professional game calls out like a hyena in a slug fest with some lions in the night…pro goalkeepers don’t get any rest.

Now, James is another fine case study in the recent failings of goalkeepers in the EPL. Again, regardless of the endless claims of “calamity”, James is a very good goalkeeper. In fact, he has a physiology, agility, strength and work ethic that would make any young goalkeeper pee in their pants…and he is now at a ripe old age of 37. So, for James at least, it is that relentless wave of game after game, his slip ups are more mental than anything physical. I remember reading, years back, of his visits to a sports psychologist to gain his focus back after performing poorly. Goalkeeping is more a mental game than anything else.

So, there is a lot to be left wanting from goalkeepers in the EPL and rightly so…to an extent. While we may believe that these guys are total shit house, they are brilliant athletes with flaws and mental pressure that is above and beyond their outfield team mates. Yes, we all like to brag about the accolades our respective teams have won, but placing the blame solely on goalkeepers is a short sighted affair. Football is a team game, that requires a team effort…or have we all forgotten this in our drunkenness for Premiership glory and national bragging rights?

I agree with Bjork…I feel sorry for the goalkeeper.