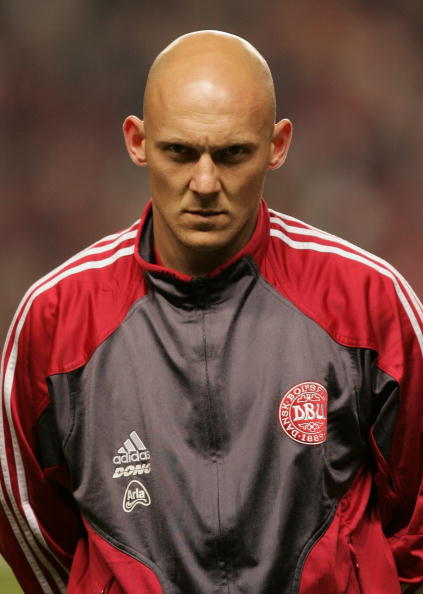 As an Evertonian I was ecstatic to have Tommy Gravesen back at Everton, but I also new that his return would bring with it a flood of myopic punditry. I am so tired of people making the brain-dead move of instantly associating a man with a shaved head and the moniker “Mad Dog” with the stereotype of a tough tackling midfielder. Gravesen was a terrible tackler, and he has never been a midfield battler. Gravesen’s attempts at being the enforcer consisted of careering around the pitch following the football like a celebrity stalker on amphetamines.

However, Gravesen does have sublime skills, is a lovely passer of the ball – he has the same type of talent as Zidane (albeit in far less abundance) of being able to send such a perfectly weighted pass that the ball literally stopped at the intended recipients feet. Grav also had the unfortunate problem of occasionally getting carried away and trying to take on the whole team, but instead of progressing towards their goal, he invariably ended up by one of their corner flags. It made me laugh when Real bought him to be their enforcer. Giving Grav the label of a tough tackler in weak journalism.

It is only because of his shaved head and wild eyes that people think he is a pseudo-keano, that and the fact people got him confused with Carsley (and now Johnson too). Even Arteta has more right to the tough-tackling moniker than Grav. The nickname “Blue Arsed Fly” would have suited Grav far better.