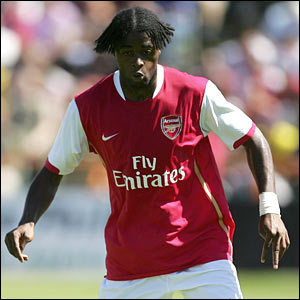 Whilst Arsenal fans grapple with the fact that one of their best players this season, if not the most improved, has left Arsenal for the fashion capital of Milan, Gooners all around the world should not be worried, as Mr Wenger really does hold all the cards. At his disposal, despite the bad transfer dealings regarding the sale of Lassana Diarra, is one of the up and coming holding midfielders – Alex Song.

Since Arsenal signed him, fans and pundits have not been impressed with his lack of positional sense and clumsiness. But despite that, time has gone by and as a avid Gooner, Song seems to have grown on me. I watched him in that fantastic game against Blackburn at Ewood Park in the Carling Cup where Arsenal ran out 3-2 winners. Then, in the African Cup of Nations, Song was fantastic throughout in the holding midfield role. Africa always seems to produce some fantastic players in this position, but the true quality of Alex Song was demonstrated when he was named in the best XI of the whole tournament, a testament to his development. Song picked up a injury in the final, but Arsenal fans finally saw the real potential when he started against Manchester United at Old Trafford. Even tho the plaudits went to Gael Clichy, Song was no doubt instrumental in Arsenal’s dogged performance, and subsequently kept his place for the next 4 fixtures.

Gaps are appearing in the Arsenal midfield, but fans should not really worry. What Alex Song gives Arsenal is a tenacious, skillful and confident midfielder who can drop into the centre-back position. Life without Flamini will be hard but he has gone now and Arsenal fans must look forward rather then back. When Patrick Vieira left, Cesc Fabregas emerged. When Nicholas Anelka left, Thierry Henry emerged. The list is endless. Its just all part of the Arsenal evolution process. Wenger believes he is singing the right Song.