In footballing terms, one is a big loser, and one is an even bigger loser – but, far more importantly – who is the bigger pillock?

France manager Raymond Domenech laid claim to this title by not only running the good ship France aground, but having the temerity to propose to his girlfriend just as the press pack were sharpening their post-match knives. The icing on the cake was the fact that ‘Les Bleus’ got beaten by Italy while their manager was wearing a prep school blazer. Newcastle players will have to pay for their own suits next week, but a drunk and colour-blind Charles N’Zogbia couldn’t have made a worse sartorial choice.

Up against the French manager is Germany boss Joachim Löw, who hasn’t got a wide array of reasons for being the number one divvy coach in the tournament. In fact, the only blot on Löw’s copybook is that he insists on wearing ridiculously tight-fitted shirts.

So who is it to be, Domenech and his Billy Bunter blazer or Löw and his tighty whitey? 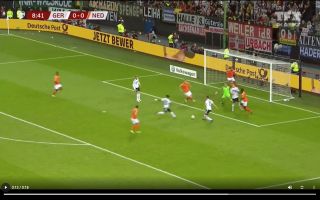