The alarm bells started ringing at the Stadium of Light as soon as Kenwyne Jones was ruled out for nine months, and it appears Roy Keane has several irons in the fire as far as striking options are concerned.

The Sunderland manager has allegedly enquired about Tottenham’s Darren Bent and the Daily Mail now report that the Black Cats have bid £10 million for Everton’s Andy Johnson. The players’s future at Goodison Park remains unclear, with neither AJ nor the club stating a desire to see him leave this summer. Although he didn’t score too many goals last season, it had been assumed that the Brummie would be retained for another season, especially as he can have an impact coming off the bench.

However, will the lure of first-team football prove too much for Johnson, who might see his first-team opportunities further restricted next season by the likes of Yakubu, Vaughan and Anichebe? Moyes’ decision to play Cahill in a supporting striker role was also a dampener for the pint-sized striker last season.

Everton fans, would you be happy to see the back of Johnson? 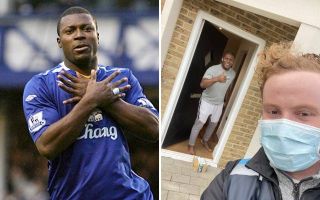