It wasn’t the greatest of Merseyside derbies, but was very much job done as far as Rafael Benitez was concerned. Two excellent strikes from Fernando Torres ensured a deserved victory for Liverpool, while Everton continue to look shoddy defensively and now face one of their key players being suspended for the next three matches. But does he deserve to be?

Mike Riley wasted little time in brandishing a red card in the direction of the Australian after his challenge on Xabi Alonso, and The Age reports that Everton will be appealing against the decision, claiming it was a yellow card at best.

“I think it warranted a yellow card, not a red card.

“We will ask the referee to have another look at it because I don’t think it was the worst tackle in the game.

“I don’t think anyone in the ground thought it was going to be a red card and so I thought it was because he hadn’t walked to the referee. But that would have been two yellow cards.”

It was certainly a clumsy challenge from Cahill, who appeared to lift two feet off the ground when challenging the Spaniard. However, the midfielder may feel aggrieved after Arbeloa had hacked him down minutes earlier. Was the red card merited or should the FA overturn the decision? 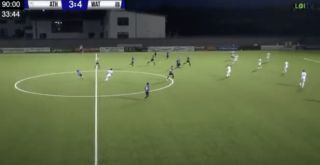