Thirteen goals in their first six league games suggests that West Ham aren’t having too many problems putting the ball in the onion bag. David Di Michele has stepped up to the plate following the injury to Dean Ashton, while the likes of Carlton Cole and Craig Bellamy ensure that Gianfranco Zola has plenty of attacking options at the moment. It looks like there could be another forward trying to force his way into the reckoning.

Many of you will have heard the name Diego Tristan before. While the striker is 32, he’s played in the Champions League on several occasions for Deportivo La Coruna, and is hoping to get a chance in the Premier League with the Hammers. Setanta reports that the Spaniard is trying his utmost to impress Zola, hoping to get a permanent contract at the London club.

“If nothing changes, I will be training until Saturday. Then we will talk and take a firm decision,” Tristan told setantasports.com.

“I was looking for a team because I still believe I have a role in football. In Italy with Livorno I proved that I have still got plenty of gas left in the tank. I’m currently working with a personal trainer.

“Zola called me. He told me his plans and the situation with the team.

“I have come to prove myself and we will see how everything goes. My first impression is positive but it doesn’t just depend on me.

“I’ve had offers this summer from clubs in Europe but I haven’t been able to finalise anything for one reason or another.

“At this moment it is not a question of money but seeing if I can be useful to West Ham.”

Tristan is obviously something of an unknown quantity, and this trial may come to nothing. However, if Di Michele is anything to go by, then Zola has an eye for a decent striker and the Italian may just have unearthed another attacking option on the cheap. After all, we know that the West Ham finances are not the greatest right now, especially with the recent Sheffield United ruling. 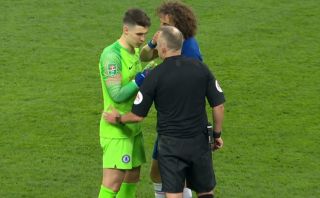 Video: Maurizio Sarri loses it as Chelsea star refuses to be subbed off vs Manchester City Feb 24 2019, 19:10
Chelsea FC

Manchester United show Chelsea who their next manager should be Feb 19 2019, 16:46
Chelsea FC