There are problems all over the pitch for Spurs at the moment. They’re conceding soft goals, they haven’t got a midfielder who can dictate the pace of the game and their front men don’t look like rippling the onion bag all too often. Indeed, it could easily be a season of struggle for the men in white, even if they’re not troubled by relegation in the end.

While many are pointing the finger at the Tottenham board, others are criticising Juande Ramos for the latest state of affairs. The Spaniard looked to have been a brilliant instalment at White Hart Lane, bringing about an improvement in fortunes last season, although his popularity has rapidly decreased this term. Sky Sports reports that Darren Bent thinks the former Sevilla gaffer should be given more time to get things right, thus indicating that quite a few of the players are behind him.

He told Sky Sports News: “I would like to see him given time. I think there are too many managers in this country that are gone at the first sign of trouble.

“He should be given a chance. He won the Carling Cup last season. He is a fantastic manager. The lads and the club are all behind him.

“We know that if we play well and keep going there is a massive chance we will put it right.

“Yes, definitely (we can turn things around). I know full well that we can do it and move up the table.”

However, there’s only so long that the Tottenham manager can point to his success in the Carling Cup last season. It was supposed to be the start of things to come, not the high point of his time at the Lane. Spurs fans, how long are you prepared to give Ramos, or do you think he’s the right man to take the team forward? 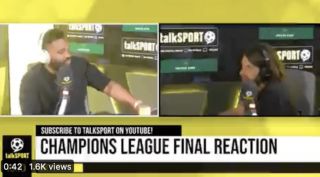 Video: ‘He always seems to overthink it’ – Guardiola slammed by pundit for Man City’s Champions League failure May 31 2021, 17:58
Manchester City