The Red Devils are playing at White Hart Lane on 13th December, and this perhaps explains why one of their strikers has started on a charm offensive with the Tottenham fans. However, will the supporters be forgiving of a player who well and truly left them in the lurch this summer?

There seems little doubt that the desire of Dimitar Berbatov to leave Spurs, and the fact that he basically refused to play for the club until they sold him to Manchester United, had a hugely negative impact on the club’s results at the start of the season. The Sun reports that the Bulgarian still seems to care deeply about Tottenham, although it might not prevent him getting a whole world of abuse next month.

Berbatov — who forced a deadline day move to Manchester United — said: “I will always have special feelings for Tottenham.

“They showed me the way in English football. I will never have anything bad to say about the club. I watch every game they play.”

The Bulgarian striker said: “I was just surprised the team got off to such a bad start because Juande Ramos was a very good coach.

“Now Harry Redknapp has come in, a very experienced manager, and I am pleased they are going up the table.”

Yes yes Dimitar, but that doesn’t explain why you were practically jumping at the chance to play for Manchester United after just a season at White Hart Lane. The supporters have every right to vent their spleen at the talented forward when Tottenham play the champions, with the player and his agent putting the club in an extremely compromising position in the summer. 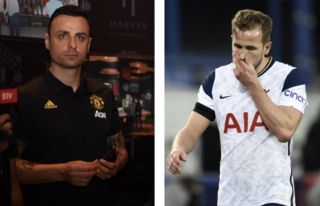