In a Brand New Article Series which we have paid to have trademarked, albeit by paying a drunk who we just passed on the street who claim to be a copyright lawyer, we bring you ‘Whatever Happened To’. 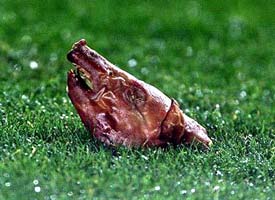 Everyone knows the story about how Portuguese International Luis Figo was greeted warmly by his former fans after he made the rather dicey decision to move from Barcelona to Real Madrid, everyone knows that to show their anger at this most disrespectful of moves they decided to lob a Pigs head at the players feet, but does everyone know whatever happened to THAT pig?! Exactly!

Well after weeks or research and detective work we tracked down the story of that lovable creature, Manuel the Pig and you would be truly alarmed to know that shortly, well almost instantaneously, after his head was removed from the rest of his body he ceased to exist and was on his way to Piggy heaven, see below the cute pig prior to being used to display the Barca fans disgust. Oddly enough Manuel the Pig was in fact a Valencia fan and didn’t really have much of a gripe with Figo. 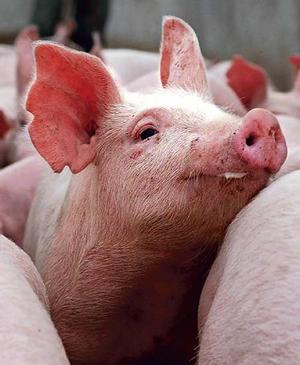