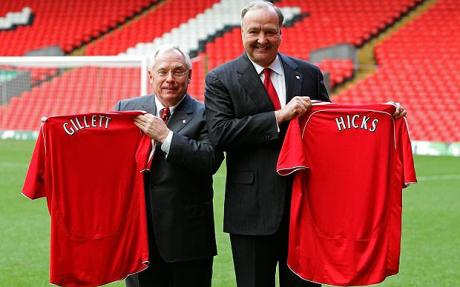 Christmas Eve 2010 Tom turns over, farts, scratches his butt and mutters something about money, leverage and collateral, and a smile crosses his jowls as he mutters but none of mine. There is a strange stirring in the corner and he slides 1 lizard eye open, he can make out the odd shape of a trim man with short grey/white hair and a red and white scarf around his neck: “Och lad”, he shouts to Tom, “get ya ass oot ya pit and kam here”

Tom, although quaking inside, feels the magnetic pull of this granite man and slides from the bed. The stranger, well it seems to be a stranger, but he seems to stir a memory deep within his brain, reaches his hand out and grasps Tom by the neck. The grip is icy cold but firm. “ Kam with me laddie” he roars in a strange accent that Tom has only ever heard on a film where the men paint their faces half blue. Suddenly there is a whoosh and a spinning feeling and Tom suddenly finds himself in a huge swaying crowd. a cavernous noise fills his ears and his body rocks from side to side “You’ll Neeverrr Waaaalkk Alooone” fills his ears and a huge roar and clapping with the sound of rattles makes him feel like his head is exploding. He looks around and sees his business partner George there too. He thinks how odd he looks in his pyjamas!

“What’s happening, where am I?” Tom asks. “ Ya on Spion Kop lad” he spits, “We’re playing Reykjavik and it’s August 64 It’s the first step of our great club’s path to European domination, and this is the sight n sound n smell of 60,000 screaming Liverpudilians surging us on to victory!”

“60,000” says Tom. All that money! How many corporate boxes are there and the franchises must be raking it in. I wish I’d owned it then”

“Money?” shouts the spectre “ it’s not about money! It’s more important than that. This is the lifeblood and soul of Liverpool Past. These people here are the supporters that will spill blood to support our team and see us onto greatness! IT’S NOT ABOUT MONEY he screams”

The spectre grabs Tom, and George by their throats and there is another whhossshh just as 60,000 jubilant fans scream and jump into the air and sway as one as Gordon Wallace fires in the 1st goal of our European trek after 3 minutes

Tom wakes in a cold sweat!!! “What a nightmare” he thinks, “who was that man that I dreamt about? I wished I’d had it then, I’d have cleaned up! All those suckers….I’ll ring George in the morning and tell him that I had a nightmare about him haha”. With that he spots the old red and white striped scarf draped on the bottom of his bed, and he hears the echo of somebody chuckling and fading into the distance the voice saying
“Some people believe football is a matter of life and death.
I’m very disappointed with that attitude.
I can assure you it is much, much more important than that” 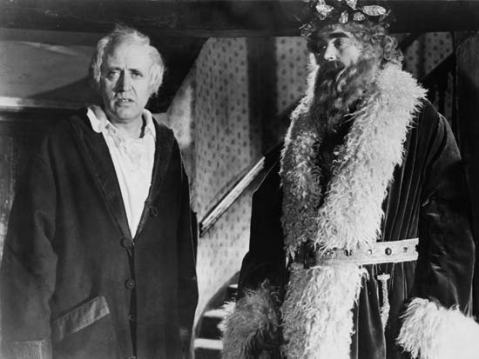 Tom quickly turns over and tries to doze off again, but the cutting voice keeps going around in his head. As his eyes close he senses more than sees a figure, shuffle into his bedroom and move towards him. It looks like a man who reminds him of his favourite granddad. He’s wearing a cardigan and slippers and again a red and white striped scarf around his neck. Tom smiles as he thinks of his granddad, as the spectre reaches out and again grabs him by the neck. “ Ahhh lad ye’re kermen with me!”

Tom knew what to expect and there is again the now familiar sense of spinning and he senses that he is flying through time and space. He realises that he is again on the Kop, surrounded by about 40,000 quiet soulful fans, all sitting with their heads in their hands. George is there again, saying nothing, but still looking odd in his pyjamas. He looks at the pitch and sees that the ball is in the back of the Liverpool net. He then looks at the scoreboard. Liverpool 0 Everton 3. Just then the whistle blows and the players start trudging off the field, heads down with boos from the rapidly emptying ground.

“What’s happening?” says Tom.
“This “says the spectre, “was the game earlier today. Did you know we were playing?”
“Yes of course“ says Tom ,” I saw the till receipts! We sold out on all food and drink, even the hotdogs, and all seats, and the programmes were gone as well. You should have seen the turnover in the shop, and the hospitality and corporate stuff was the best ever with it being a Christmas Eve game. A REALLY GOOD DAY” “ Ah” says the spectre, but did you know the score?” “ No “ says Tom but just think of the money!.

“Right” lilts the spectre “ let’s walk out with the fans. I remember the hard times too. One year we finished second, so I know how they’ll feel”. The spectre shuffles off in his slippers and Tom follows with the ever silent George tagging along behind but with a very confused look on his face. Why is he in my nightmare again, things Tom. He can hear the supporters as they walk out together:

“Just think this time last year we were top” says one. “Yeah and look at us now, 5th from bottom and no hope of getting better”.

“ Just think” says another, if Torres,Gerrard and Skirtel had not had those injuries in February after selling Babel, Kuyt, and Agger in January, and if we could have won that last game of the season to get 4th place, we would have been ok”

“I know” says another. “What if they hadn’t sacked Rafa? I don’t think that Torres and Reina would have left”. “ No” says his mate, “ I also think that Gerrard and Masch would have insisted on staying, but since the heart was gone from the side and Beavis & Butthead wanted the money to pay the interest on their loan cos there was no CL money, they agreed to be sold. The kids are trying but they are not up to it, and Jay and Jamie are trying to hold them together, but it’s not looking good”

“Why are they complaining?” asks Tom. “ I mean what do they want? To win all the time?” “Come with me says “says the spectre. He nods his head as he passes a statue outside the ground which looks vaguely familiar to Tom. The spectre gives it a nod and what’s really odd is that the statue nods back and it’s got a Red & White scarf around its neck! The spectre leads Tom into the shop then into the History of Liverpool display. He spends the next 2 hours (or so it seems) telling Tom about the great past. Tom starts yawning because he’s bored and doesn’t understand all this football and history stuff. “They were playing football here when we were fighting Indians”, he thinks to himself. George is nodding off in the corner.

Soon the slippers shuffle towards him and grab him by the throat and they are wizzing away again and he’s back in bed. He hears the strange lilting voice saying something about “If you’re in the penalty area and don’t know what to do with the ball, put it in the net and we’ll discuss the options later.” whatever that means. It’s then he spots the slippers at the bottom of his bed next to the scarf as he starts to nod off.

“ OH NO NOT AGAIN” his sleepy brain tells himself as he hears “You’ll Neeevveerrr Waaaallkkk Alooone” from a few muffled voices in the distance and a ghostly wisp of a spirit approaches and without a word grabs him by the throat and off he slips again.

This time he arrives at a ½ empty ground. It looks oddly familiar, but the crumbling ground is a mess. Half the lights are missing and there are broken windows around. Red paint is peeling from the walls, and some awful smells waft up from downstairs. Some of the seats are roped off to concentrate the paying public into smaller areas. There is a row of corporate boxes, but no lights in any and no glass in half of them. All empty! A gaggle of supporters are trying to get the rest of the crowd to sing. Just then a familiar face makes a huge lunge for the ball and saves a certain goal. “All we need is a team of Carraghers” starts to come from a few of the supporters. The player, a grizzled greying player looks up and smiles, then pumps his fist at the other players and screams something about passion! Tom wonders what this passion thing is with the other players?… strange.. I thought that communal baths had been stopped? 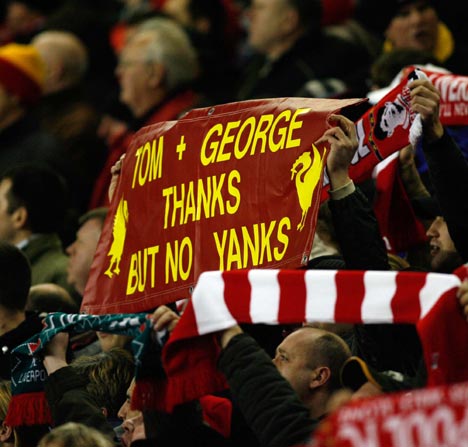 “Where are we now and who are you” stutters Tom. “This “says the spectre, “ Is Anfield future”. With that, Tom spots a paper on the ground. “Look” he says, “ The paper says that we are top of division 1. Ha. What’s wrong with these people? We’re successful, top of the league! What do they want?”

“The spectre looks and sighs……” Division 1 is the 3rd league from the top you ignoramus. We are down 3 divisions. If it wasn’t for Jamie, willing to be player manager for free and Robbie playing for nothing we would be even worse off. Half the people here make use of the free tickets that Robbie gives to people who rent his houses. That was your idea so that food and drink sales stayed enough to pay Owen and Sami for coming back”.

“Well” says Tom, you do have to pay your debt, I mean there is all our interest to pay for our loan AND there is the extra interest for the money that we lent you to buy players, and don’t forget the expenses….. Hmmm I wonder if I can claim for his… it’s got to be worth a couple of mill all this time travel………..”

“But who are you?” asks Tom. The spectre fixes him with his red eyed stare. “ I’m the Spirit of Liverpool Football Club. I’m the soul of the club that you have raped for the last years. All of a sudden Tom & George are standing amidst hundreds, then thousands, and then millions of pressing bodies chanting and a ghostly echo fills Tom & George’s heads.

“We are the lifeblood of the greatest club that ever was but is no more because you sold our very soul to sate your greed. We are the ghosts of all that has gone before you ripped me to shreds. We have lived and some even died for our club!”

With that they are joined by the gritty hard man and the granddad figure that they had met earlier, but they can’t quite recognise. Tom’s heart beats faster as he sees the steely glint in their eyes. In chorus they say

“We are here to watch you and your companies and your “fancy franchises” dwindle to nothing just as you have destroyed our great club. We will be with you every step of your waking and sleeping life until you give this club up and leave. We will be in your nightmares and your waking vision and when you leave we will rise again. Believe us we will rise above you and defeat you as we are unconquerable and will never ever quit”!

When WE walk through a storm
Hold OUR head up high
And don’t be afraid of the dark.
At the end of the storm
Is a golden sky
And the sweet silver song of a lark.