Bet on Chelsea with Sportingbet.com and get a free bet worth up to £50 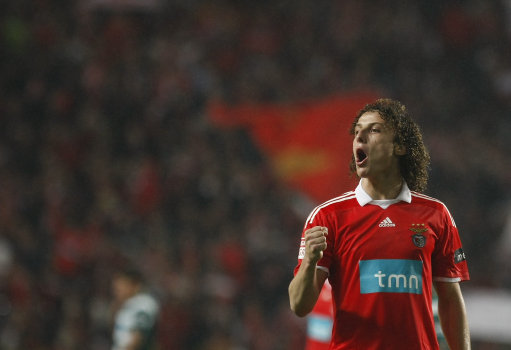 Reports in Portugal suggest that Benfica are in London to engage in negotiations with Chelsea about defender David Luiz.

The Brazil international has been strongly linked with a move to Chelsea for the past weeks as the Blues look to strengthen their backline.

Benfica and Chelsea have so far failed to reach a compromise for David Luiz, who has a release clause of €50 million (£42.5m), with the Portuguese club playing hardball over the fee.

However, it is now suggested that a deal could be in the making after Benfica president Luis Filipe Vieira flew to London in the company of agent Giuliano Bertolucci to hold talks with Chelsea over a potential move.

It is believed that the Blues are ready to offer €25million (£21.2m) plus one of their players in order to meet Benfica’s demands.

Carlo Ancelotti appears to be in advanced negotiations to complete the signing of highly rated Brazilian international David Luiz and the only sticking point appears to revolve around any possible player swap that will make up part of the overall deal.

Benfica are struggling to retain their Portuguese title and are some eight points from arch rivals Porto and were eliminated from the Champions League at the first hurdle and these factors have apparently left the 23 year old looking to leave the Lisbon club in joined in 2007.

Chelsea find themselves with very few defensive options, something they must have seen coming when they elected to sell Ricardo Carvalho to Real Madrid, and now the Blues boss is hoping to bring in at least one, perhaps two, new centre backs to add to the likes of John Terry and Alex who have been ably supported by youngster Jeffrey Bruma.

By all accounts Benfica would prefer Kalou to Paulo Ferreira but clearly a lot would depend on whether the Ivorian was keen on a move to Portugual.