Bet on Liverpool with Sportingbet.com and get a free bet worth up to £50 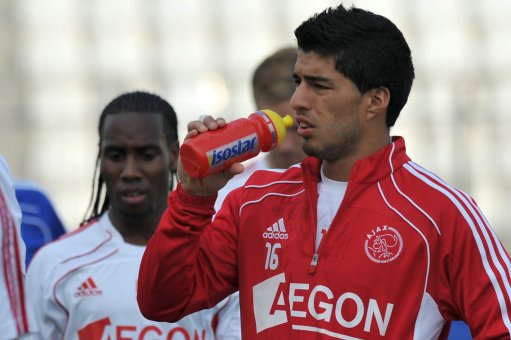 The Reds are understood to have been in contact with Ajax regarding the Uruguay international, but the two sides’ valuation of the striker remain some way apart.

De Boer told De Telegraaf the club will not let Suarez go at the end of the transfer window as he needs time to bring in a replacement.

“To replace Suarez will be difficult, but we are ready. We have a Plan B, we know what we want if he leaves.”

It appears from this source that Ajax boss Frank de Boer wants this deal done sooner rather than later and it seems that the Uruguayan international is edging nearer to a big money move to Anfield as the Amsterdam club look to maximise the sale of a player who has made it clear he wants out.

Luis Suarez is not happy at Ajax and has had his eyes on a Eredivisie exit ever since Martin Jol left the club in December. The 23 year old goal machine wants to move to the Premier League and clearly appears excited about the prospect of making the move to Liverpool.

Kenny Dalglish and Liverpool Director of Football Damien Comolli are keen to boost the club’s attacking options and clearly feel that a partnership of Fernando Torres and Suarez could work wonders and it’s hard to argue with that assumption as both players are natural predatory finishes with great pedigree.

The fee needed to snap up the Ajax man appears to sit somewhere around £20m and some sources believe that not only is a deal a very distinct possibility but as de Boer himself has stated, the deal may be struck early next week.

Eidur Gudjohnsen could be brought in by the Dutch giants as a short term solution to the loss of Suarez as it seems highly unlikely the cash strapped club will be able to reinvest too much of any cash they receive from Liverpool.