Not football related, well not as we know it, but amusing and interesting nonetheless. 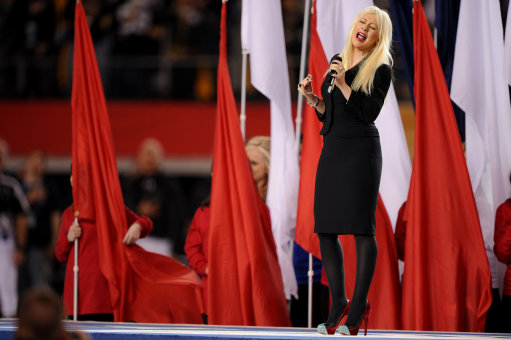 Christina Aguilera fluffed a line of the Star-Spangled banner as she belted out a version of the US national anthem to open Sunday’s Super Bowl in Texas.

The singer, 30, should have sung: “O’er the ramparts we watched, were so gallantly streaming?” but repeated an earlier line with a slight variation.

She sang: “What so proudly we watched at the twilight’s last gleaming.”

The anthem is one of the set piece events of the glittering Super Bowl pre-game ceremony.

Aguilera’s mistake immediately set social networks abuzz with chatter. Her representative could not immediately be reached for comment. (BBC Sport)

So there you have it, a publicity stunt? A genuine error? Either way it seems that Christina Aguilera has become public enemy number one in the US. Here is the moment she got the lines wrong.