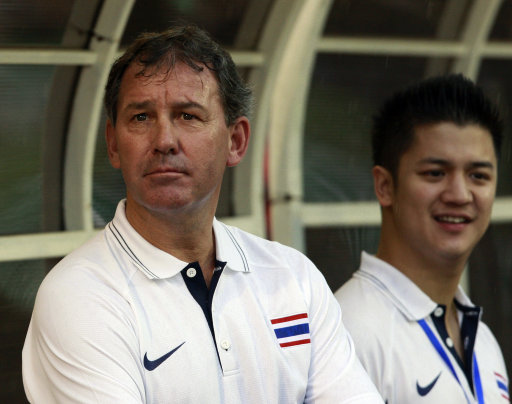 The 54-year-old caught the tumour at an early stage and underwent the operation in Bangkok on March 3 and specialists believe he will make a full recovery.

Robson is currently the head coach of Thailand and combines the role as a Manchester United ambassador.

‘Captain Marvel’ won 90 caps for his country, 65 as captain, despite a succession of major injuries.

He moved into management and was in charge of Middlesbrough, Bradford, West Bromwich Albion and Sheffield United before replacing Peter Reid as Thailand coach in 2009.

“Bryan Robson underwent an operation to remove a tumour from his throat on March 3, 2011 in a hospital in Bangkok,” a Manchester United club statement read.

“The laboratory report revealed a cancerous tumour, which will need further treatment. The oncologist is confident that the condition is treatable.”

“At this moment Bryan is fine to continue with his role as Thailand coach and his role as ambassador of Manchester United.

“Bryan and his family have requested that he can continue with his treatment in private and ask that their privacy is respected.”