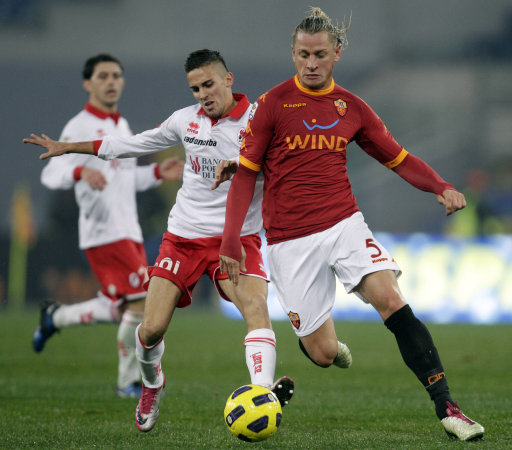 Liverpool will battle Arsenal for the 28-year-old Frenchman Philippe Mexes, who is likely to leave Roma on a free transfer when his contract ends at the close of the season, if they decide Gary Cahill is not worth the money, or indeed if Cahill decides Liverpool are not worth the hassle of moving house, and joins Manchester United instead. Also linked with moves to Anfield, not for the first time, are Real Sociedad’s Antoine Griezmann, St Etienne’s Dimitri Payet and Yann M’Vila of Rennes.

Director of football Damien Comolli is busily building a summer shopping list as he looks to revamp Liverpool’s squad and will hope that the Anfield club’s money men provide funds to bring in this quartet.

Liverpool boss Kenny Dalglish is keen on bringing in another centre back to strengthen his defence and is now looking to Roma’s experienced French international Philippe Mexes who seems likely to leave the Stadio Olimpico after seven solid years at the Serie A side. Given that Jamie Carragher and Sotirios Kyrgiakos are getting on a bit then it would make sense to bring in some more back up.

The Merseyside club are also looking to bring in more natural width having used the likes of Maxi, Dirk Kuyt, Milan Jovanovic and Joe Cole with mixed results and one name that is continually linked with Liverpool is Dimitri Payet, the promising Saint Etienne man has recently been drafted into the French senior international set-up, such has been his progress. Antoine Griezmann is another French talent who could be drafted in to offer another wide option.

Yann M’Vila would add more steel to the club’s midfield although given the good form shown by Lucas, perhaps such a move is less crucial.

Comolli’s connections with the French youth and Under 21 teams appears to lead to him being linked with just about every young talent coming through in the country and it seems that Liverpool will look to bring in promising talent to merge with the young stars coming through the club’s academy system.