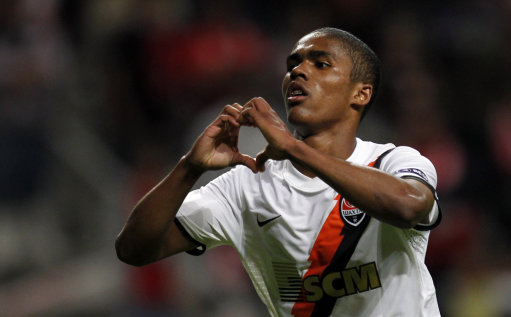 Manchester United are edging closer to sealing a deal to sign Shakhtar Donetsk midfielder Douglas Costa after the player’s agent confirmed his client’s interest in a possible move to Old Trafford. Sir Alex Ferguson has been tracking the playmaker and was linked with a move for the 20 year old before the former Gremio man moved to Ukraine.

Douglas Costa’s agent Cesar Bottega told Italian source calciomercatoweb.it
“Several clubs are following him and there was some contact, but no concrete proposal has yet arrived. We’ll see how things evolve. If there is a chance to play elsewhere, I am convinced that the boy can do well even in a top team. Manchester United have liked him for a very long time”

Ferguson has been looking to strengthen his squad with the addition of a goalscoring midfielder and having seen the flair player making such an impact in the Champions League this term the Man United boss is ready to make an offer.

Douglas has been instrumental in helping Shakhtar to an eleven point lead at the top of the domestic table and guiding Mircea Lucescu’s side past Roma in the knock out stages of the Champions League as well as top of their group stage.

Though Ferguson has a number of central midfield options his side does lack firepower from the position and the likes of Anderson, Darren Fletcher, Michael Carrick and Paul Scholes do not offer an advanced outlet that could link midfield and attack in much the same way as a Frank Lampard does for Chelsea or Rafael Van der Vaart does at Tottenham.

Douglas Costa is valued at around £20m and the fact that a number of his countrymen, Rafael, Fabio and Anderson, already ply their trade at Man United a move to Old Trafford may well be very tempting.