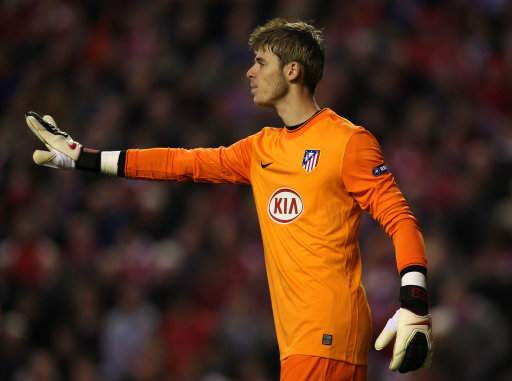 SIR ALEX FERGUSON is clearly extending his policy of buying young players to his goalkeeping department – with the ­£18million arrival of David De Gea this summer.

Sir Alex Ferguson has decided that Atletico Madrid ace De Gea, 20, is the keeper he wants to succeed Edwin van der Sar, 40, who is retiring at the end of the season.

The De Gea swoop will be completed in the summer, when Spain’s Under-21 star signs a five-year contract.

The news that Bayern Munich have apparently taken a big step towards signing Schalke keeper Manuel Neuer, another Ferguson keeper target, may well mean that this source is actually perhaps nearer to the truth than your might first think. It does seem likely that Anders Lindegaard is a back up alternative and not likely to be the keeper the Man United boss looks to take the mantle of first choice keeper, not least because the 27 year old has zero top level experience.

David De Gea has shown talent and maturity way beyond his years and in goalkeeping terms the 20 year old is something of a phenomenon. It is very rare of a player of such tender years to be a first team regular and one who is incredibly consistent.

The Madrid born custodian doesn’t turn 21 until November and 74 senior appearances to his name and on the verge of a call up to the senior Spanish team where he could well end up the logical successor to Iker Casillas. De Gea won the Europa League and reached the Copa Del Rey final in his first season and is a very capable keeper with a very bright future.

Sir Alex Ferguson is clearly looking to the future when it comes to new additions, having brought in Chris Smalling and Javier Hernandez to great effect last summer the Old Trafford boss has been linked with moves to sign some of England’s top young stars with the likes of Jack Rodwell, Jordan Henderson and Alex Oxlade-Chamberlain high up on the Scot’s radar.

Such a leaning towards youth is of course no surprise as a number of Man United’s old guard edge nearer to the end of their glittering careers. Gary Neville and Edwin Van der Sar have both announced their retirements and the likes of Paul Scholes and Ryan Giggs are clearly nearing calling it a day. Michael Owen and Owen Hargreaves are unlikely to be offered new deals and there are constant injury concerns over Rio Ferdinand so this summer could see a lot of comings and goings at the Premier League table toppers.