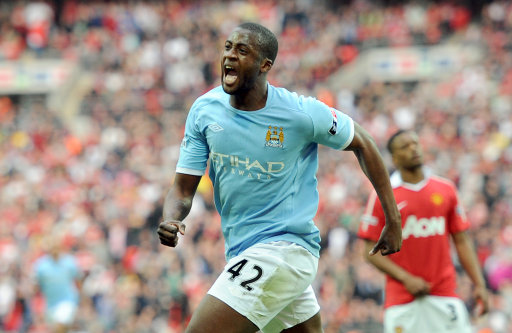 Yaya Toure will be the subject of a big-money summer bid from Real Madrid, according to reports in Spain.
Jose Mourinho has earmarked the Manchester City star, who made his name at Madrid’s bitter rivals Barcelona, as the perfect midfielder partner for Xabi Alonso.
Reports have even suggested that the manager wanted to sign Toure last summer before he moved to Eastlands in a £24m deal in June.
And having been impressed by the 27-year-old in his debut Premier League season, Mourinho is now ready to go back for Toure this summer and are willing to offer City around £20m for his services.
But Roberto Mancini will be desperate to keep hold of Toure, who has been one of the signings of the season and arguably City’s most consistent performer this term.
The Ivory Coast international, younger brother of City defender Kolo, has been almost ever-present in Mancini’s side, scoring five goals and setting up another six in the Premier League.

Would former Barcelona man be prepared to suffer the ire of the Catalan fans by moving to the Bernabeu? It does seem that if you don’t make a direct move between the two arch rivals then you are less likely to have a Pigs Head lobbed in your general direction but the Ivory Coast midfielder would still get more than his fair share of abuse but given his size and stature one would imagine he would take it like a man.

Roberto Mancini will be loathed to lose the talented battler but if the Eastlands side does not seal a top four finish then the likelihood of such a move becomes all the more realistic.