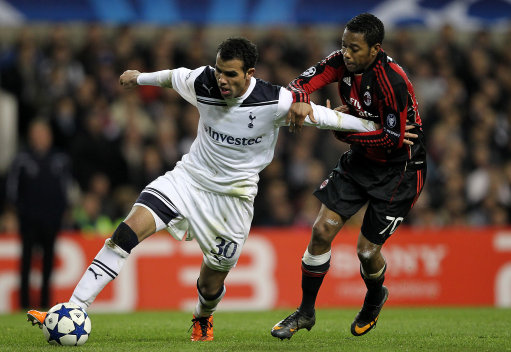 Barcelona are poised to make a move for Tottenham midfielder Sandro following his superb displays for the north London club this season.
Sandro, 22, has made an immediate impact at White Hart Lane and played a major role in helping the club reach the quarter-final stage of the Champions League.
Reports in Spain state that Barcelona coach Pep Guardiola is a big admirer of the Brazilian midfielder and has sent scouts to see him play.
Both AC and Inter Milan have also been linked with Sandro, but Harry Redknapp would be reluctant to lose a player who has only just made his breakthrough into the first-team.

It seems a number of Tottenham’s high profile players are being linked with moves to Europe’s elite and Harry Redknapp will have an even tougher fight to keep all his star performers if the North London club does not secure a top four finish.

Sandro has been a big hit since his first team breakthrough, the Brazilian international has shown tenacity and determination that has made him a much loved player in a relatively short space of time but Barcelona’s interest may well tempt the 22 year old.

The likes of Rafael Van der Vaart, Gareth Bale and Luka Modric have also been strongly linked with moves away from White Hart Lane and though they will clearly be overjoyed with the huge steps Tottenham have made under Redknapp they will also have gotten a taste of playing at the highest level whilst also advertising their abilities to the biggest clubs.