Ever wondered where all the money goes? 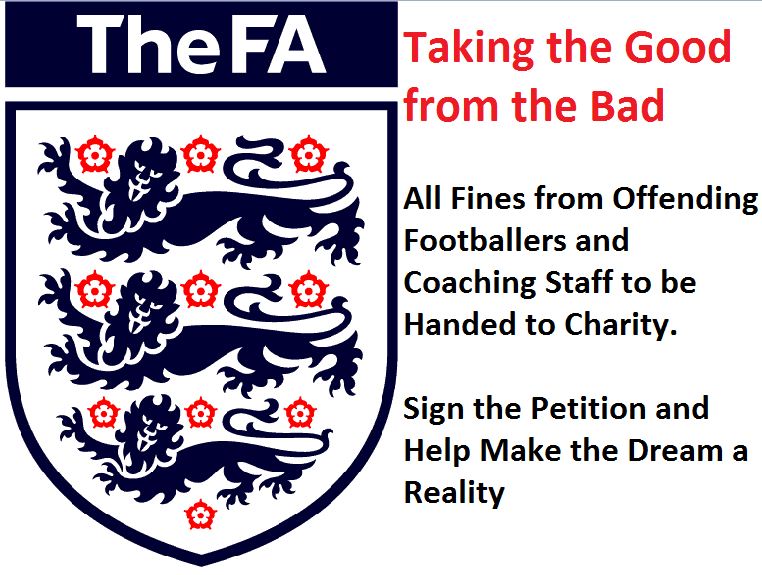 In an industry that is clearly cash heavy and where fines are seemingly at an all time high, one would imagine it would give the FA a great shot in the arm if they decided to hand all money accumulated from fines handed to players and coaching staff to charity.

The English FA is a much maligned body, filled with grey men in old suits, actually that should be the other way around but strangely still works. One way to appease the masses whilst also doing a great deal of good, would be to see the venerable organization hand over the funds made from the misdemeanour’s conducted by professional footballers to a just and worthy cause.

If the issue is that a certain portion is needed to keep the FA ticking over then perhaps an admin cost can be incurred by the footballers which would then pay for the FA’s upkeep but that the fine itself is then handed in its entirety to a charitable organization. We are sure that footballers would be more than happy to pay a small surcharge on their fines, an admin cost much like we all pay for various facets of our day to day life, in return for which the FA hands over all monies made from the fines they meat out.

Such a thoughtful act would help to change opinions of both the FA and perhaps football itself. It would serve to remind those within the game that the vast sums of money within the sport can help execute real change and could be of real use to those in need.

We have no doubt that the FA gives generously to charity we are simply asking that all fine revenue is given to those who could so desperately be in need of such a charitable donation. It should be noted that the campaign name “Good from the Bad” refers explicitly to the action of giving fine monies accrued from ‘bad’ acts by footballers and coaching staff to the ‘good’ meaning charities.

Please sign the petition by CLICKING HERE and help spread the word by hitting the Facebook ‘like’ button at the top of the page or by Re-Tweeting this article and passing on to your football loving friends.