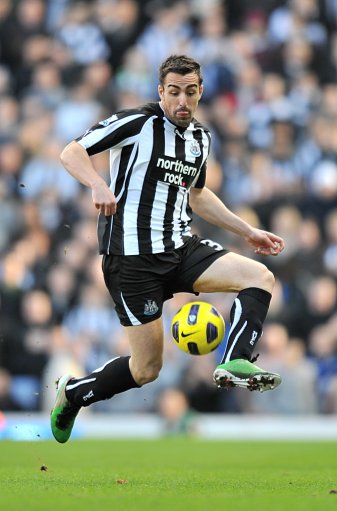 Liverpool’s chances of signing Newcastle United star Jose Enrique have been boosted after Alan Pardew made it known he would be interested in signing Paul Konchesky as a replacement for the Spaniard, Goal.com can reveal.

Enrique is Liverpool’s first choice to solve the club’s problem left-back position in the summer and Newcastle’s interest in Reds defender Konchesky raises the possibility of a player-plus-cash deal.

The two clubs are yet to open negotiations but Newcastle are privately resigned to losing the £8 million-rated man, who has just one year left on his contract and is also attracting interest from Arsenal and European giants AC Milan and Bayern Munich.

Given that Paul Konchesky had a woeful spell in the Liverpool first team before Kenny Dalglish took over and that he is currently enjoying a loan spell at Nottingham Forest, it seems likely that Liverpool will happily use the former West Ham man as a make-weight in any offer they make for Newcastle United left back Jose Enrique.

The Spanish full back seems more than more likely to leave this summer as the Magpies look resigned to having to adapt to life with the consistent performer and clearly Alan Pardew knows Konchesky well from his days as Hammers boss.

Whilst Konchesky has clearly not impressed at Liverpool the 29 year old could yet rescue his career and a move to Newcastle United would surely tempt the Barking born former England international.

Liverpool have been looking to secure a new first choice left back having used Glen Johnson and Danny Wilson to fill the spot as back up Fabio Aurelio has missed portions of the season with injury. Youngster Jack Robinson has impressed but 17 is probably too raw to be a first choice starter.

Kenny Dalglish is keen to bring in new additions this summer having signed Luis Suarez and Andy Carroll in January. The Merseyside boss has admitted that qualification for the Europa League could help garner additional funds for new purchases.

25 year old Enrique is valued at around £8m and Konchesky could bump up any offer from Liverpool up to around £10m.