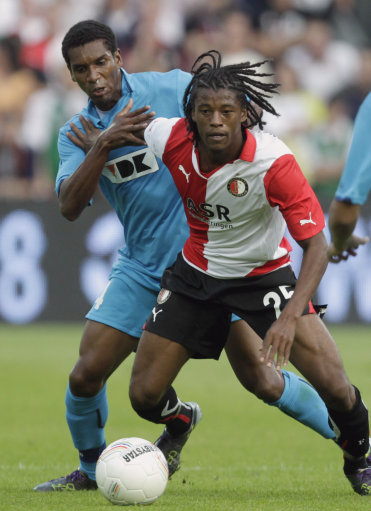 Liverpool are reportedly preparing a significant offer for Feyenoord playmaker Georginio Wijnaldum this summer. Director of football Damien Comolli has earmarked a move for the free scoring 20 year old midfielder who is on the fringes of the Dutch international set-up.

Wijnaldum has been linked with a move away from De Kuip after the Rotterdam based side slumped to tenth place in the Eredivisie after a difficult campaign that included an embarrassing 10-0 defeat against PSV Eindhoven.

On a personal level the local born youngster has been a big success netting 14 goals and assisting many others and Liverpool’s pursuit of re-building their squad with the signing of top notch youngsters to complement the young talent coming through the club’s academy, has led to Comolli’s interest in the €15m (£13.1m) rated Dutch star in the making.

The Merseyside club have purchased the likes of Raheem Sterling and Jonjo Shelvey in the past year and seen academy graduates John Flanagan, Jack Robinson and Martin Kelly greatly impress and the club’s new owners are keen to bring in youthful talent that can be part of the club’s long term drive for major honours.

Having already invested in the signings of Andy Carroll and Luis Suarez, Kenny Dalglish has stated his intention to bring in more new additions this summer and the potential that Georginio Wijnaldum possesses clearly impresses Comolli who is known for his ability to spot young talent from the continent having spent seven years as European scout at Arsenal before director of football stints at Tottenham and St Etienne.

Georginio Wijnaldum has been likened to Cristiano Ronaldo in his style of play, his direct running and has an eye for goal much like the Real Madrid star.

Back in November 2008 the then teenager stated “I will need at least a couple of years before I’m ready. Dirk Kuyt is my role model. He left Feyenoord when he was the best, I am not that far.” Which further fuel the chances of a successful move for the Dutch Under 21 international.