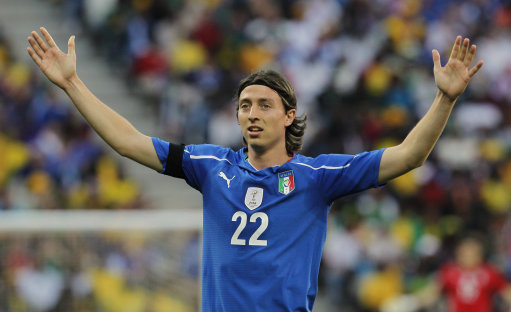 Sir Alex Ferguson is reportedly preparing a significant bid for Fiorentina skipper Riccardo Montolivo. The box to box midfielder is high up on the Old Trafford boss’s summer wish-list and Italian sources suggest that the Man United manager is willing to offer €20m (£17.5m) for the 26 year old, an offer the Scot will hope will tempt the Serie A side to sell.

The Italian international will be out of contract in the summer of 2012 and could well be looking into leaving Florence after six seasons as a regular at the club. Now a regular in the international set-up and considered as one of the best players in his position, many of Europe’s elite would like to get their hands on the adaptable midfielder but Ferguson will be confident he can tempt the former Atalanta man to the Premier League.

Montolivo is able to act as a steely central midfielder but is also known for his runs into opposition territory as well as his ability to score stunning, and timely, goals when needed. Fiorentina have once again struggled to make an impact in Serie A and are set to miss out on European football of any kind next term.

Ferguson has been linked with a number of players as he looks to replace injury plagued defensive midfielder Owen Hargreaves as well as look into potential purchases of those who can add more goals to his midfield with the likes of Darren Fletcher, Anderson, Michael Carrick and Paul Scholes not offering much in that department currently.

Montolivo may be the jack of all trades who could be an ideal solution to these problems. The Fiorentina man has been a consistent force in Italy for a few years now and may well be the type of player who has the ability to adapt to life in the English top tier.