Old Trafford boss keen on Emirates Stadium star who only has one year left on his current contract. 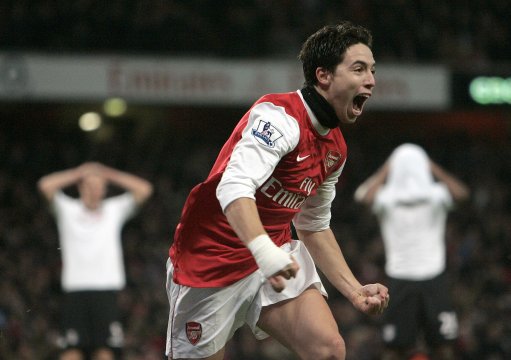 Samir Nasri ‘a shock target for Man United as Arsenal talks stall’
Manchester United could be about to make a surprise swoop for Arsenal midfielder Samir Nasri.

According to French reports, the schemer has become a target of Sir Alex Ferguson after contract talks with the Gunners have stalled.
Nasri is out of contract at the Emirates at the end of next season meaning Arsene Wenger could be forced to sell, or risk losing his fellow Frenchman for free should a new deal not be agreed.
L’Equipe claim the former Marseille midfielder has become frustrated at the club’s lack of progress in recent years, and would consider a move to United should he not receive the right guarantees about the future direction of Arsenal.

French international Samir Nasri was arguably Arsenal’s top performer last term by quite a distance and talk that the former Marseille man is holding out on accepting a new contract appears to have attracted the interest of Premier League title winners Man United. Sir Alex Ferguson is reportedly looking to bring in more creative midfield options and clearly a move for the 23 year old would be a wise move in that regard.

Arsene Wenger may struggle to keep some of the club’s top talent after a sixth successive season without silverware and the likes of Gael Clichy, Andrei Arshavin and Cesc Fabregas have all been strongly linked with Emirates Stadium exits this summer and interest from Man United in Nasri will surely worry the Gunners boss.

Samir Nasri has spent three seasons at Arsenal and last term saw the talented attacker net 15 times and assist many more but with just one year left on his current deal Wenger must decide what to do as he will not want to see the player run out his deal and leave for nothing in the summer of 2012.

Sir Alex Ferguson has bene linked with a number of creative attacking players with the likes of Alexis Sanchez, Wesley Sneijder and Rafael Van der Vaart the most notable reported targets, however perhaps the Old Trafford boss feels that a move for Nasri would be a cheaper option as his value will have significantly decreased with his contract so near to completion.

The Man United boss may feel that he needs to bring in additions as he looks to continue the rebuilding of a squad that has a fair few elder statesman. The likes of Ryan Giggs and Paul Scholes are nearing the end of their glittering careers and having signed Javier Hernandez and Chris Smalling last summer, Ferguson has stated his intention to sign at least three new players when the transfer window re-opens.