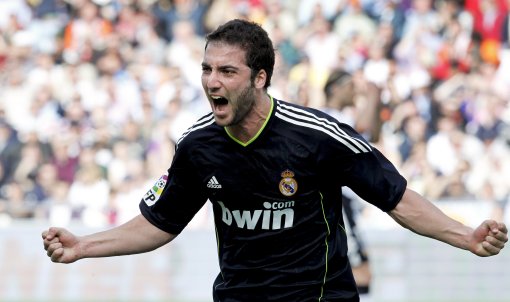 Arsenal, Tottenham and Manchester City have been alerted to the news that Real Madrid may be willing to sell Gonzalo Higuain for just £15m.
The Argentina international scored 13 goals in 25 appearances last season despite four months out with a back injury.

Tottenham and Arsenal both arguably need some extra firepower and the news, if accurate, that Real Madrid are willing to sell Gonzalo Higuain will no doubt attract a great deal of interest. After all the Argentine international, who was out for most of last season, has netted 59 La Liga goals in his last 83 matches. Jose Mourinho is keen to bring in further attacking options and many would have though that Karim Benzema would be more likely to leave the Bernabeu than the 23 year old former River Plate striker.

Arsene Wenger may feel it is time to give the Gunners an attacking injection after depending on injury prone Robin Van Persie for the last few seasons, only to then have to deal without the Dutchman for large chunks of most campaigns. Arsenal brought in Marouane Chamakh last summer and the Moroccan started well at the North London club but trailed off badly after Christmas.

Wenger also has the likes of Nicklas Bendnter and Carlos Vela to call upon but may well be tempted by a move for Higuain, especially if he can be purchased for as little as the quoted fee of £15m.

Harry Redknapp may be in more need of a striker though. Last term Tottenham managed just 55 Premier League goals, sides who finished below Spurs such as Liverpool, West Brom and Newcastle United all managed more and even relegated Blackpool scored as much as the White Hart Lane outfit.

The club’s striking quartet of Peter Crouch, Jermain Defoe, Roman Pavlyuchenko and Robbie Keane all failed to make an impact, managing just 18 Premier League goals between them and Redknapp has been linked with a plethora of new strikers and will surely look to offload one or two of his current crop in favour of bringing in new firepower, a move for Higuain will also tempt Man City who may see a move for the Real Madrid man as more of an option if Carlos Tevez leaves this summer.