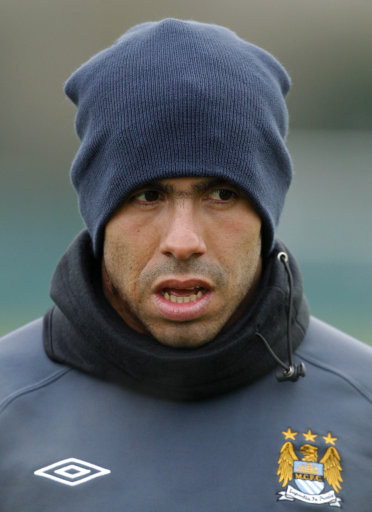 The Gunners are also considering a bid for France Under-21 international striker Emmanuel Riviere, who plays for Saint Etienne.

Manchester City are set to battle Chelsea and Manchester United for the signature of Tottenham midfielder Luka Modric, 25, and are ready to start the bidding at £30m.

Meanwhile, Chelsea and City could be fighting for the signature of Tevez’s fellow countryman Javier Pastore, after the Palermo player admitted he is on the move.

Both Manchester City and Chelsea will have to wait until the end of July before they can make a move for Atletico Madrid’s Argentine striker Sergio Aguero.

Arsenal boss Arsene Wenger could have won the race to sign Lille striker Gervinho in a deal reported to be worth about £10m.

But he still might be gazumped by Manchester City, who have offered the 25-year-old a “huge” salary.

But Danish international Nicklas Bendtner could be leaving the Emirates Stadium – the 23-year-old striker is a £12m target for Turkish giants Besiktas.

A release clause in Phil Jones’s Blackburn contract has temporarily halted the central defender’s move to
Manchester United. Although the deal is still expected to go through, the Premier League champions may have to pay more than £16m for the 19-year-old.

Manchester United have off-loaded £7.4m winger Bebe to Turkish club Besiktas on a season-long loan with a view to a £2m permanent move.

The Anfield outfit are also interested in Catania’s Matias Silvestre, according to the Serie A club. The 26-year-old defender has attracted attention from Spain and Italy too.

And Japanese midfielder Keisuke Honda has alerted Liverpool – and Arsenal – after declaring he’s “stuck in a rut” at current club CSKA Moscow.

Fresh from the £20m injection from the sale of Jordan Henderson, Sunderland are attempting to outbid Liverpool for Ipswich striker Connor Wickham with an £8m bid which could rise to £12m.

Tottenham Hotspur want Sunderland’s Ghana international striker Asamoah Gyan as part of a deal that would take Peter Crouch to the Stadium of Light.

Aston Villa have shifted their attentions to Everton manager David Moyes after they were rejected by Roberto Martinez, who opted to remain at the DW Stadium.

However, Mark Hughes and Owen Coyle are still in the frame to succeed Gerard Houiller at Villa Park.

Both Moyes and Coyle may have already snubbed approaches from Villa, whose list of candidates is believed to include former Newcastle manager Chris Hughton and ex-Chelsea boss Claudio Ranieri. The club have not totally ruled out a return to Mark Hughes or Steve McClaren after previously snubbing them.

Coyle is poised to fly to Spain to clinch a £5m Bolton swoop for Barcelona midfielder Thiago Alcantara, 20.

Bayern Munich have followed up their interest in Tranmere’s Dale Jennings, 18, with an offer. Jennings is desperate to join the Germans but is being forced to wait as the clubs agree a fee.