As Barcelona continue to hover above Emirates Skipper, perhaps this Bundesliga based midfielder could fill the void? 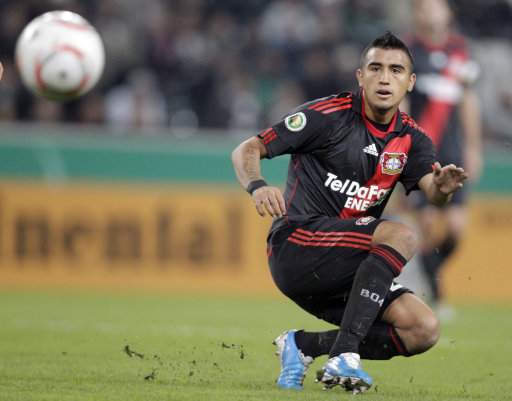 In the back-drop of Cesc Fabregas’ perennial flirtation with Barcelona and the Samir Nasri Saga, a number of midfielders have been linked with Arsenal as possible replacements including Juan Mata and Eden Hazard. These names have been in the fore of European under21 football for years and while the name Arturo Vidal is a lot less likely to excite a crowd of desperate gooners, some of the opinion that it shouldn’t be considered such a shot from the dark in the eyes of the Arsenal faithful – and according to numerous media outlets such as talkSPORT and The Mirror, on of those people is a certain Mr Arsene Wenger.

What’s his pedigree?: Vidal has long been admired by many big clubs and was the most expensive transfer from Chile when Bayer 04 Leverkusen bought him for £6.9million after his performances in the Under20 World Cup – overachievers Chile came third. Since starting life in Chile as a centre-half, 24 year old Vidal has gradually moved further forward throughout his career and now plays as an explosive box-to-box midfielder who iswell rounded in offence, creativity and defence: last season Vidal scored 13 goals, got 12 assists, completed 82% of his passes and completed 56% of his tackles. Vidal’s fiery nature is what endears him to Bayer and Chile fans with a fantastic workrate but he also has a habit of collecting yellow cards and suspensions at an alarming rate (1 in 3 games).

How’s the chemistry?: Vidal is competent at Spanish and German so would have little problem in settling in. Tactically, the 6ft Vidal is highly versatile and could fill in for any of our three central midfielders in our current 4-3-3 with a holding, creative and attacking midfielder player (Alex Song, Cesc Fabregas and Samir Nasri at the moment). Conversely, there’s a certain young English player in the Arsenal side called Jack Wilshere who is very similar to Vidal in style of play and clockendview has no doubt he will surpass Vidal in ability soon, which means buying Vidal even if Fabregas or Nasri leaves would render the involvement of our young central midfielders as redundant – one positive way of looking at Vidal could be as an upgrade for injury-prone Abou Diaby.

Do we have a chance?: The original report which this article and other British publications cite is this piece in Bild, the leading German football rag. There has been huge speculation over the future of Vidal as he has one year left on his contract and talks have been held with Bayern Munich, AC Milan and Napoli. Bayern Munich weighed in with the first rejected bid of £9 million and Vidal seems to have his heart set on Bavaria:

“You must forgive me, I want to take this unique opportunity. One of the best clubs in the world wants to sign me. Moreover, my old coach is Jupp Heynckes there. I have given everything for Leverkusen – that would not go in the dispute.”

However, club director Wolfgang Holzhäuser responded by saying: “There is a threshold that has not been reached. But Vidal will not change within the League …”. AC Milan have also had a £9 million bid rejected as it was deemed too far under Vidal’s £12.6 million valuation: however, Bayer are in a weak position with the player refusing all contracts. Likely Bid: £9 million.