CaughtOffside’s South American correspondent Tom Weber keeps you up to date with all the goings on at this summer’s Copa America. 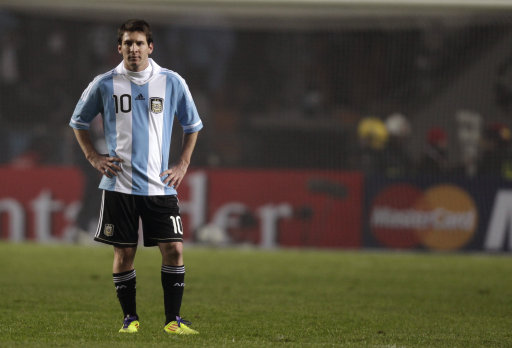 Last night played host to the 700th match in the 95 year history of the Copa America. You would be forgiven then for expecting a classic. Unfortunately, as has been the way with Argentina in recent years, they failed to provide a spectacle.

As the teams lined up for the national anthems inside the Estadio Ciudad de La Plata, the 50000+ fans were in what seemed to be a sombre mood. The Argentine anthem was sung to absolute silence. However, as it neared the end the crowd began to join in, raising the tone with a crescendo of noise at the end.

From the off you could sense the crowd expected the result and wanted a show. The first chance came for Argentina after 3 minutes a simple free kick into the box was met by Tevez as the Bolivians failed in an attempt to play the offside trap, leaving the City Striker with a free header in the centre of the box. However, it seemed he did not realise he had such a great deal of time and could not direct his header on target and the chance went begging.

The home side had the better of the opening minutes with Bolivia being limited up front as Marcelo was finding it difficult up top on his own. Once the game was around 20 minutes in Bolivia looked like they were finding their feet, they had a bit more possession but struggled to ever test Romero in the Argentina goal.

Ezequiel Lavezzi was being used as Argentina’s main outlet down the right wing, and he was playing well, but they struggled to create opportunities. One came when Lionel Messi played the ball out to Lavezzi on the right who charged forward, taking on defenders before cutting inside the box and laying the ball of to Messi. The Barcelona striker took a first time shot and the Bolivian Keeper … fumbled the shot. Esteban Cambiasso tried to take advantage of this but the keeper made it difficult for him as he scrambled towards the ball. Cambiasso could not maintain control as the ball kicked up off the keeper and went wide.

As the first half drew to a close, it had been a very bitty game. There was no real fluency to the Hosts play and they struggled to maintain consistent pressure on the Bolivian defence. As the half drew to a close the frustration of both players and fans alike grew. The tension within the stadium made for a strange atmosphere that would not benefit Argentina’s cause.

As the first half was goalless Sergio Batista, the Argentina coach, brought Angel Di Maria on for Esteban Cambiasso. A change of shape ensued from a 4-3-3 towards more of a 4-2-2-2 often favoured by the Brazilians. However, within just 3 minutes of the Second Half, the Bolivians took a shock lead. It was a truly calamitous moment for the Argentine defence. Jhasmani Campos played in the corner for Bolivia, he had been arguably one of their better players. The ball fell low and short of the near post but Rojas met it with a deft flick of his heel. As the ball came to Banega on the line, his miscontrol allowed it to squirm under his boot and Romero dived for it but could not keep it out. The Bolivians took a shock lead.

It was not until the 60th minute that Argentina began to pressurise the away team. There seemed to be more urgency in their play as the crowd became ever more restless. Raldes was solid at the back for Bolivia and stifled many of Argentina’s plays throughout the game.

This desire for a goal from Argentina left them short at the back and were caught on the break by Moreno. He got in behind an extremely high line in the Argentinian defence. The Shakhtar player tried to round Romero but he got a hand to it. He then saved another follow up chance and Moreno spurned a great opportunity to put the game to bed, much like his Wigan days.

Argentina continued to attack and began producing a number of chances. Di Maria dragged a cross goal shot past the far post, Mascherano had a volley as the ball bounced out of the box but it was always rising, and Aguero – who came on for Lavezzi – made an instant impact with a mazey run but he pulled his short wide of the near post.

Bolivia continued to press the ball high up the pitch and began time wasting at any opportunity. Messi was being stifled and was not performing at his best, often the reason the fans seem to have more adoration for Tevez.

Eventually the goal came for the home side and what a goal it was. Di Maria whipped in a cross from the left which curled out towards the back post. Burdisso was on hand to chest the ball down exquisitely and what followed has even more sumptuous. Sergio Aguero swivvelled and unleashed a thumping volley that had the keeper beaten all ends up. It was a superb goal that will already be a contender for goal of the tournament. The stadium came to life and the fans were in full voice, trying to urge their team to get the win.

They stepped it up a gear and Aguero had another opportunity as he tried to bend a trivela in with his right foot but he could not find the corner. Tevez and the Atletico man were linking up well and looked very dangerous. Tevez had a couple of half chances as the game neared its end but he did not manage to put either away. The game ended 1-1 leaving the Argentinian public somewhat disappointed.

Tonight’s game is Colombia vs Costa Rica and kicks off at 20:30 in the UK and is on ESPN. After tonight there will be 2 group games a night. Costa Rica have sent their Olympic side due to their participation in the Gold Cup last month. Colombia look like being a strong side and it will be interesting to see Falcao’s performance. Remember the top 2 teams go through alongside the 2 best third placed teams. This means that this result is not devestating for Argentina but they have just made it far more difficult for themselves.