Old Trafford boss back on the hunt for long term target. 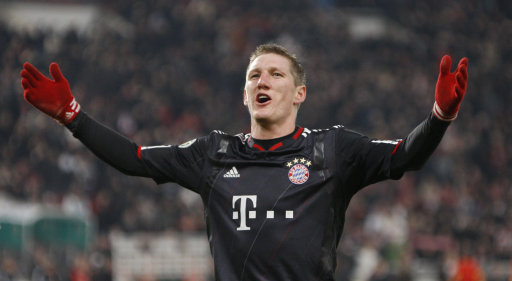 Ferguson is still searching for a player to add an extra creative spark to his midfield and having already been linked with moves for Arsenal’s Samir Nasri, Inter Milan’s Wesley Sneijder and Tottenham man Luka Modric, the Scot is looking to make a move for long term target Schweinsteiger who may be tempted by a move to the Premier League champions after Bayern Munich’s poor season.

The Bavarian side lost their Bundesliga crown to Borussia Dortmund and slipped to third spot before being dumped out of the Champions League by Inter Milan, all of which led to Louis Van Gaal leaving the club before the end of the last campaign.

Man United are readying a £30m move for the 26 year old German international who is tied down to a long term contract at the Allianz Arena.

Ferguson may feel his midfield lacks goal getting potential with the likes of Darren Fletcher, Michael Carrick, Anderson and Darron Gibson rarely figuring on the score-sheet. Schweinsteiger not only weighs in with crucial goals he also contributes a great deal into helping his team-mates hit the back of the net.

Schweinsteiger may be seen as the ideal man to help link midfield and attack and the Man United boss is clearly in the mood for spending and is reportedly still looking to add another signing or two before the season gets underway.

Chelsea are also said to be keen on the Bayern Munich man who has racked up just short of 350 appearances for the club he has represented since the age of 14.

Ferguson is also considering using striker Dimitar Berbatov as a makeweight in a deal should Bayern Munich consider selling their mercurial midfielder.