South American correspondent Tom Webber brings you all the action from the Copa America. 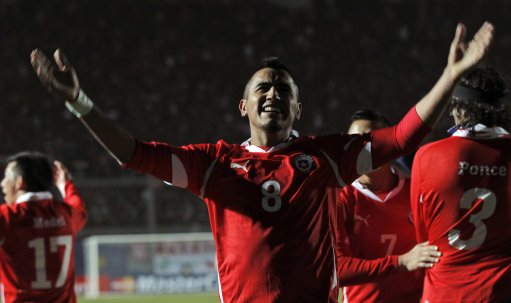 After the turnaround from the Uruguay Peru game, the stadium in San Juan was set for the intriguing prospect of Chile versus an Olympic Mexico side. Chile lined up in a 3-5-2 formation, different to the odd 3-3-1-3 formation used by recently resigned coach Marcelo Bielsa. The Argentine cult-hero manager resigned due to the election of Jorge Segovia as President of the Chilean FA. Bielsa’s formation, whilst being unorthodox, enabled Matias Fernandez to play in a free role in between the oppositions midfield and defensive lines, enabling him to do what he does best and create the play. Mexico lined up in a conventional 4-4-2 and handed out no fewer than 6 full international debuts in their starting line up. How would Chile, post the much loved Bielsa, handle their improved reputation in the South American game.

It only took 5 minutes for Alexis Sanchez to get his first opportunity. He was played in by his Udinese team mate Mauricio Isla who played a great through ball from the right flank. Sanchez got in behind the defence and got the ball under control. As the keeper narrowed the angles, Sanchez tried a placed finish, hoping to pass the ball in to the far corner. He seemed to take too much time and lost the angle as the keeper approached. His shot went wide of the far post when he should have really worked the keeper.

Fernandez had an opportunity to put Chile in the lead from a free kick that was won by Alexis Sanchez. Diego Reyes, the youngest player in the tournament, was judged to have fouled Sanchez though it looked to be a fair challenge. Fernandez could not get enough curve on his free kick and the ball ended up going off target. The next best chance came in the 40th minute and was a goal. Surprisingly, Mexico took the lead through Nestor Araujo. A ball into the box was met by a collision in the air between two players, allowing the ball to pop off to Araujo. The Mexican defender managed to generate enough power on the header to put it back across the goal and the looping attempt hit the back of the net.

After the break, the Chileans were much the better side. Mexico were struggling to contain the 5 man midfield of Chile and allowed them to create many opportunities by moving the ball around to open up spaces. After Humberto Suazo spurned a chance to equalise, Chile eventually got there due to a poachers effort from Esteban Paredes. The Chilean striker performed well in this years Copa Libertadores and were unfortunate not to progress through the group stages. Sanchez won the corner after some terrific work down the right and Mati Fernandez put the ball in the box. His delivery was good and the ball has knocked down due to a poor header from Pablo Contreras. He reacted first and managed to aim the ball goalwards with his left boot. The ball rolled across the goal before Paredes stuck it in at the far post. The ball may have been going in but the Colo Colo striker ensured the game was level.

It was just seven minutes later that Chile took the lead through Arsenal target Arturo Vidal. Another corner from the right hand side was sent into the box by Fernandez. Vidal got up first and highest and headed to the ball from near to far post. Michel had no chance of saving the header which was expertly executed.

Once Chile had the lead Mexico struggled to contain them further. Sanchez played far better in the second chance and was creating a lot for his side. He played in Suazo whose cutback for Paredes was just too far for the Chilean forward to reach and Chile wasted a great opportunity to win. Mexico had one final attack, after some great work down the right by dos Santos, he drilled a ball in to second half substitute Edgar Pacheco. His shot was saved by Bravo’s face in the Chile goal. Mexico having lead at half time, lost the game 2-1 due to a revitalised Chilean side in the second half.

It is easy to see why Chile’s standing in international football has improved with their second half display. They may have underestimated the inexperienced Mexican side in the first half and almost paid the price for that. The end to end match showed they still have the firepower and ability to control a game and score that they had under Bielsa. Claudio Borghi, the current coach is no stranger to Chilean football having led Chilean giants Colo Colo to 4 titles (2 Apertura’s, 2 Clausura’s) as well as victory in the 2010 Clausura with Argentinos Jrs in Argentina. Despite a poor spell at Boca Juniors Chile have picked a decent successor to Bielsa and I think his team will continue to grow throughout the tournament.