Centre back hangs up his shin pads. 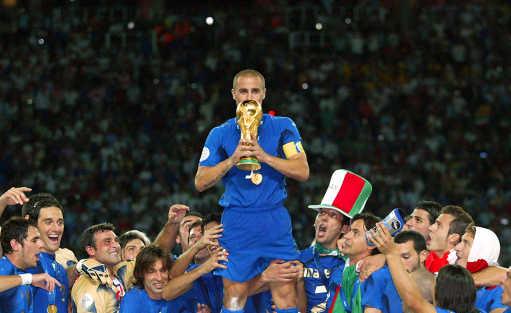 World Cup-winning captain Fabio Cannavaro has been forced to end a 19-year career because of a chronic knee injury.

The 37-year-old revealed he was ‘very sad’ about retiring from football altogether but doctors warned the former Italy centre-back that he could not continue with such an injury.

His injury had forced him to miss the final seven games of last season for the Dubai club, however he has revealed he will remain there taking on a technical adviser role.

“I am very sad. Football is everything for me in my life,” he said.

Cannavaro is the only defender to be voted FIFA World Player of the Year, winning in the same year he led Italy to the World Cup in 2006.

There are few more decorated footballers of his generation than Italian defender Fabio Cannavaro, in a career spanning almost 20 years the Naples born centre back notched up over 600 club appearances and a record 136 international caps.

The honours the defender has collected are numerous, to name a few, Fabio has two La Liga titles to his name, a UEFA Cup success and of course a World Cup winners medal as well as a World Footballer of the Year gong.

As far as central defenders go, Cannavaro is a fairly slight built 5ft 9in so had to show even more determination than a usual 6ft plus defender and his never say die attitude and ability to lead a team made him a much loved character in Italy. See below a good compilation of the former Napoli, Parma, Inter Milan, Juventus and Real Madrid at his peak at the 2006 World Cup.