We’ve got 20 tickets for our readers to win! 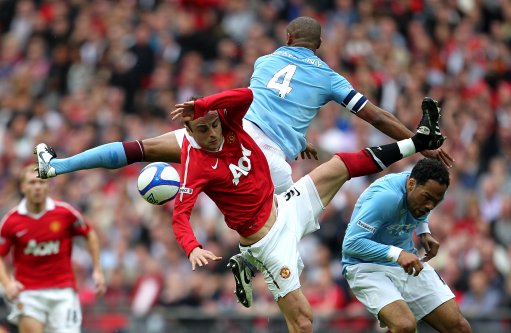 We’ve teamed up with McDonald’s, the official Community Partner of the FA, to offer ten readers, the chance to win two match tickets to watch Manchester United take on Manchester City at The FA Community Shield, sponsored by McDonald’s, on 7th August at Wembley Stadium.

This year’s match will be a Manchester derby which will see bitter rivals Manchester United and Manchester City go head to head in this competition for the first time since 1956. All eyes will be on the Red Devils as they look to secure their 14th Community Shield victory against current FA Cup holders Manchester City, who will be wanting to kick-start the new season with a win and a trophy under their belts.

McDonald’s has been the Community Partner of the FA since 2002 and aims to create more football opportunities for all. Since the partnership was formed McDonald’s has created over 20,000 qualified football coaches, offering 2 million hours of free, quality coaching to young players across the UK.

Geoff Hurst, McDonald’s Director of Football, said: “This year’s FA Community Shield will no doubt be a sell-out as fans from across the country make their way to Wembley to support the Reds and the Blues. It’s going to be a great game – a fantastic match to kick-off the new football season and I wish everyone who enters the competition the very best of luck!”

To be in with a chance of winning this fantastic prize, answer the following question:

Q: How many times have Manchester United won The FA Community/Charity Shield? (Including shared trophies)

Send your answer to us by email to editor@caughtoffside.com.

Entries must be received by noon on Friday 29th July

Rules: Please note that, in addition to these Provisions, entrants are bound by both the Promoter’s and the Supplemental Rules For Third Party Promotions Featuring Football-Themed Prizes Supplied By McDonald’s (“General Rules”) at www.mcdonalds.co.uk/policies/football-terms-and-conditions.shtml.

Participants: Must be 18 and over and UK resident

Entry Criteria: Answer a question correctly to be entered in to a draw for a chance to win.

Conditions of entry: Limit of one entry per person.

How to Submit your Entry: Entries to be submitted via post or email. No other method of entry will be accepted.

Prizes: The prize pool consists of ten prizes each of:

Prize Awards: Winning entrants will be notified by email.

General: Winners will be required for promotional and media activity in relation to this promotion and other related McDonald’s football activities, including facilitating the publication of press releases, editorial and photographs on the UK websites of the Promoter, McDonald’s, and The FA, winners’ local media and in McDonald’s UK restaurants.