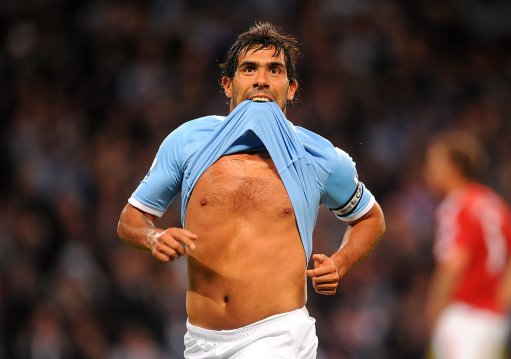 The 27-year-old was pictured shaking hands with the Serie A club supremo with the striker keen on leaving City this summer.

The Argentina striker saw a £40million move to Corinthians collapse after the Brazilian side failed to guarantee the proof of funds the Blues were asking for.

Most European teams have baulked at the price tag slapped on his head by the Manchester outfit, it seems Inter are willing to enter negotiations with Roberto Mancini’s side.

Tevez wants to leave the Etihad Stadium to be closer to his family who live in Argentina.

But even if a move to Milan does not materialise, Mancini insists Tevez will be welcomed back to City next season.

“At the moment Carlos is still a City player, like yesterday, like three days ago,” he said. “In the future we will see what can happen.

“But for us Carlos is an important player. Carlos wants to leave, wants to come back to Argentina or maybe another country for his family.

“It is only because of this I think that the club accept to sell Carlos, because I think that we respect his reasons.”