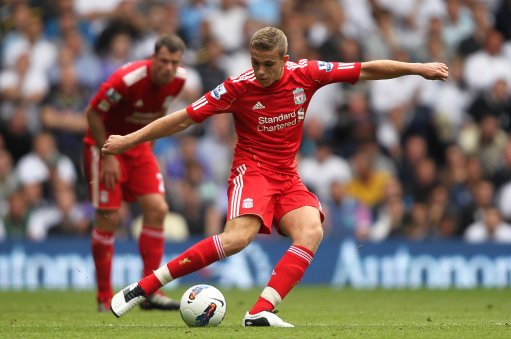 Liverpool midfielder Jordan Henderson insists he is not worried about captain Steven Gerrard’s return from injury affecting his first-team place.

The 21-year-old who joined the Reds last summer for £20million from Sunderland started the first six matches of the season but was only on the bench during the Merseyside derby.

Gerrard is expected to feature prominently against Manchester United on Saturday making the England U21 captain’s task of holding his place even tougher.

But Henderson is not letting it affect his focus and hopes to regain his position for the visit of the Premier League champions.

“I am not really worried about that, I think it’s part and parcel of football,” he told Sky Sports.

“Obviously Stevie is a massive player and is going to play in most games, but I just need to concentrate on what I need to do and work hard every day in training.

“Given the opportunity, I need to take it and make sure I stay in the team.”

“Obviously the derby is a massive game and everybody wants to play in it, so I was a disappointed not to start, but the team did brilliantly and got a great result and I was fortunate to come on as well.

“There were still a lot of positives to come out of the game and hopefully I can start the next one.”