Race To Poland And Ukraine enters the home straight. 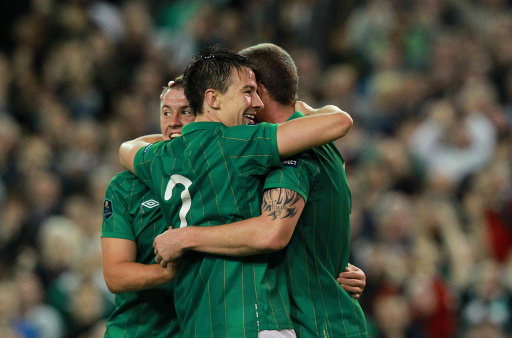 The Republic of Ireland must get the better of Estonia in a two-legged play-off in order to qualify for next summer’s European Championships.

Tuesday’s win over Armenia ensured Giovanni Trapattoni’s men finished second in Group B and they were paired off with the Group C runners-up.

Estonia have never reached the finals of a major tournament, and this is Tarmo Ruutli’s side’s first play-off appearance.

Ireland have played in five-play offs before, winning just once.

Their last appearance ended in acrimony when they were knocked out by France following a controversial handball by Thierry Henry ahead of the 2010 World Cup.

The first leg will take place in Estonia on either November 11 or 12, with the return leg at Dublin’s Aviva Stadium on November 15.

Estonia finished 10 points behind group winners Italy in qualifying, with six of their points coming courtesy of wins over Northern Ireland.

The Republic emerged from a tough group containing Russia, Armenia and Slovakia – but will be relatively pleased to have drawn Estonia.

There were tougher-looking assignments in the pot of unseeded teams they could have been put up against.

Turkey will host Croatia, the Czech Republic taking on Montenegro and Bosnia going up against Portugal.