Liverpool skipper staying at Anfield for entirety of career. 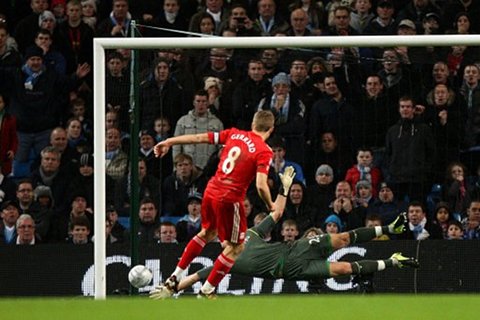 Liverpool captain Steven Gerrard has signed a new contract, and will see out his career at Anfield.

The England international star scored the winning goal from the penalty spot as the Reds beat Manchester City at the Etihad Stadium last night, and news of his new deal completes a glorious 24 hours for the club talisman.

“I’m very happy,” said a jubilant Gerrard. “It’s a very proud day for myself and my family.

“It comes on the back of a fantastic team performance last night when we got the result we were looking for. Hopefully we can finish the job off in two weeks time and take all of our magnificent fans down to Wembley for a day out.

“The contract extension coming the day after has been the icing on the cake so it has been a perfect 24 hours.

“This is the club I love and is the club I have supported since I was a young boy. I am living the dream as the captain of one of the biggest clubs in the world. I love coming to work every day and the experiences I have had since I was eight years of age and first signed for the club, I wouldn’t change them for the world. To extend that and to hopefully have some more good times in a red shirt is what I want.

“There will be more highs and lows, there’s no doubt about it as that’s part and parcel of being a football player at a top club. The important thing is that you react well to the lows and experience more of the highs. I’m confident moving forward that the club is going in the right direction. We’ve got a fantastic team, we’ve got the right owners in place and the right team behind our team, so I’m really confident we’ll have more good experiences in the future.”

Gerrard will move into an ambassadorial role at the club upon his retirement.